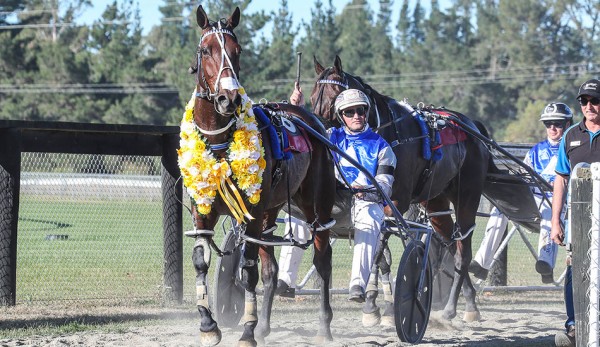 But the good news is Hayden Cullen couldn’t be happier with Self Assured.

Like all of his New Zealand Cup rivals, the pacer has been limited to light jogging since New Zealand went into level 4 lockdown.

Though it wasn’t part of his plan, it is not expected to have any impact on the five-year-old’s New Zealand Cup programme.

“Nothing has really changed with him,” Cullen said.

“He was originally down to go to the trials on September the 8th and the week after that, so at the moment his schedule is still good.”

Cullen had Self Assured fast working before lockdown and in that short time he showed his trainer his New Zealand Cup rivals will have plenty to worry about come November.

“I have been very happy with him, he had six weeks off after the Rangiora Classic and gee he came back in good order.”

“He’s actually strengthened up even more, so I have been thrilled with him.”

Cullen has another potential New Zealand Cup contender in his team in One Change.

The four-year-old raced in Australia all of last season and hasn’t started in New Zealand since his second behind Copy That in the Flying Stakes at Addington in March of last year.

The New Zealand Cup is an option for the pacer though Cullen won’t firm up his plans until later in the spring.

“We have been working him up and I have been happy with him, he should be at the trials with Self Assured once we get out of lockdown.”

Spankem won’t be heading to the trials alongside Self Assured and One Change or seeking New Zealand Cup redemption after heading to the spelling paddock.

After producing some surprisingly below-par performances during his recent Queensland campaign the runner-up to Cruz Bromac in 2019 and runner-up behind Self Assured in 2020 won’t get his chance to go one better in the 2021 New Zealand Cup.

Spankem is in the spelling paddock and he will stay there for the next 2-3 months, ruling him out of a third tilt at New Zealand’s greatest race.

“He raced below his best in Australia and we just weren’t that happy with him.”

“With the owners, we decided to give him a good break.”

“Hopefully at Auckland Cup time that could work in his favour.”

The Group 2 Canterbury Classic will be Self Assured’s first race day assignment this spring.