What a day for Copy That, Blair Orange and Mark Purdon 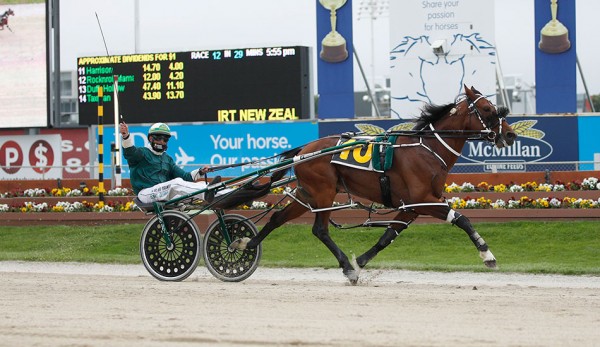 Copy That's win in the greatest race of them, six driving wins for Mark Purdon and three for Blair Orange - those have been the highlights of New Zealand Cup Day 2021.

It was the first win in the country's biggest race for veteran trainer Ray Green who watched the race from his Auckland home, as he was not able to travel to Christchurch because of Covid restrictions.

It was Blair Orange's second win, after his triumph with Cruz Bromac.

Copy That started well in contrast to last year when his chances were ruined at the start and once he got to the front he was always going to take a lot of running down.

Self Assured and South Coast Arden put themselves in the race but Copy That was just too strong. He started second favourite, paying $4.40 with hot favourite Self Assured (Mark Purdon) second.

It was Orange's third winning drive of the day after earlier victories with Krug and Archman.

Before the New Zealand Cup it had been Mark Purdon's day - he had driven six winners (and co-training five of them).

Here's a rundown of how the day went race by race. 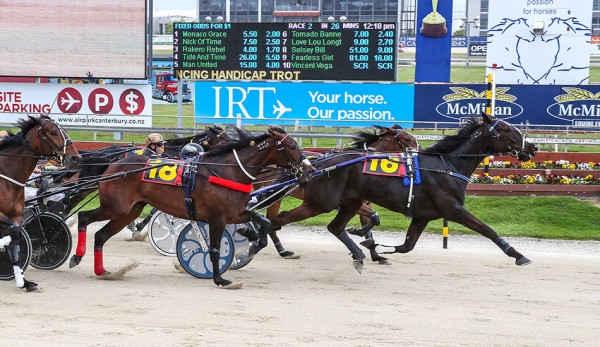 Mark Purdon opened his account with favourite American Pride winning the first on Cup day.  Starting off 20 metres American Pride went round to sit parked outside the pace-setting Cochy Malc before repelling a strong challenge from Springbank Mason and She Reigns, who produced a huge run off the backmark of 30 metres. Purdon had labelled American Pride as his best chance for the day and he delivered with his sixth win in 17 starts. Springbank Mason paid $12.80 for the place, with 16:9:18 trifecta paying $2,035.20. The winning time was 3:17.80.  The well favoured Andy Hall missed the start and was never a contender. 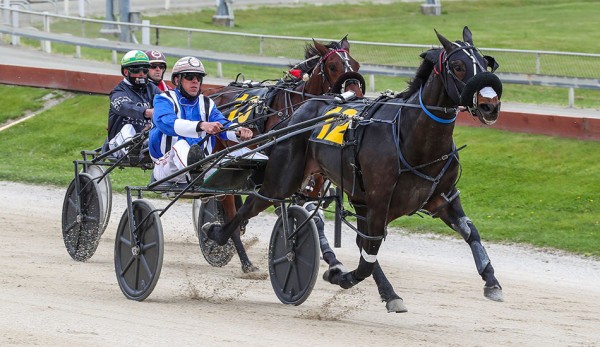 Rakero Rebel was the favourite but it was the Phil Burrows-trained stablemate Smart Watch who won Race 2. Rakero Rebel (Gavin Smith)  was held up turning for home and it was Smart Watch, after making a well timed midrace move, who prevailed for John Dunn, paying $5.50 and $2.30. Rakero Rebel finished fourth behind a very game Azor Ahai (Blair Orange) and Love Lou Longtime (Nathan Williamson). The 12:13:7 trifecta paid $389.30.  It was Smart Watch's second start after a fourth on debut at Ashburton in May. 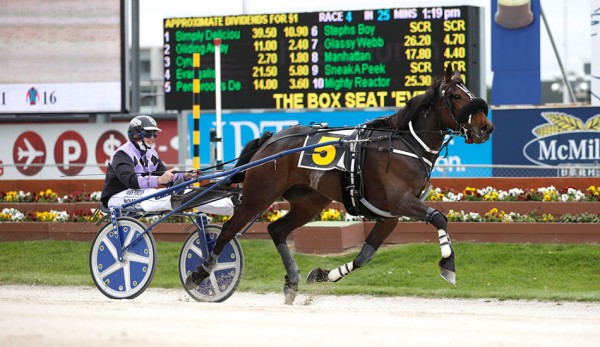 Race 3: The Box Seat Every Wednesday 9am Handicap trot : 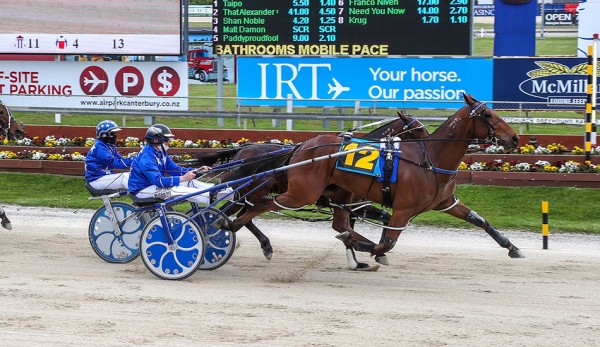 It's Mark Purdon again, with his third win in the first four races with Always Have Faith beating stable-mate Cyrus. Cyrus was the favourite for Natalie Rasmussen and was parked outside the pace-setting Pembrook's Destiny. But it was Always Have Faith who loomed on the home turn, going on to win his second race in four starts.  Always Have Faith paid $6.10 and $1.90, Cyrus $1.60 and Mighty Reactor was third ($7.40).  The time for the 1980m was 2:24.5. 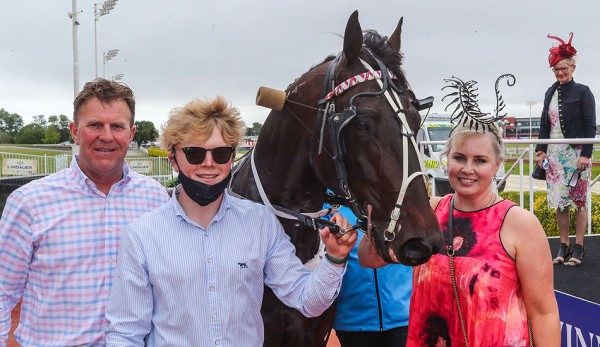 Krug is back! Disappointing from the stand in his last two starts the return to the mobile was critical for the star colt as Blair Orange went straight to the lead from the outside of the gate and then was never really in danger. It was number 15 from 28 starts. Need You Now ($4.10) was an eye catching second for John Dunn with Shan Noble third. Krug paid $1.50 and $1.30 with the 8:7:3 trifecta paying $24.90. The winning time was 3:08.20. 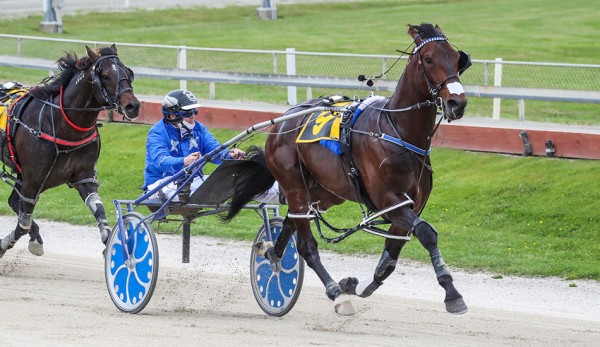 With win number four for the afternoon Mark Purdon has done it again - this time with the plunge horse It's All About Faith. After opening at $12 the horse was backed into $4 second favouritism and Purdon took the son of Captaintreacherous into the lead and he then dominated. It was his seventh win in 20 starts. Favourite Deny Everything disappointed, with Heza Sport second, and Alta Wiseguy third. The 9:6:10 trifecta paid $132.60. 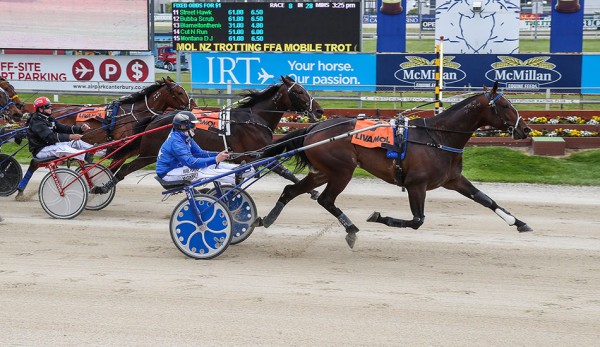 Mark Purdon's incredible Cup day continued in the Group One Livamol Trotting Free For All. He's now co-trained four winners (with Hayden Cullen) and driven five winners from the first 7 races!  He bided his time with Oscar Bonavena as Majestic Man went to the lead as expected. Bolt For Brilliance, the favourite, sat parked but they had no answers when Oscar Bonavena upped the ante as he cleared out to win by 1 1/4 lengths.  Oscar Bonavena  paid $3.30 and $1.20. The 7:3:6 trifecta paid $16.60. The winning time was 2:24.80. 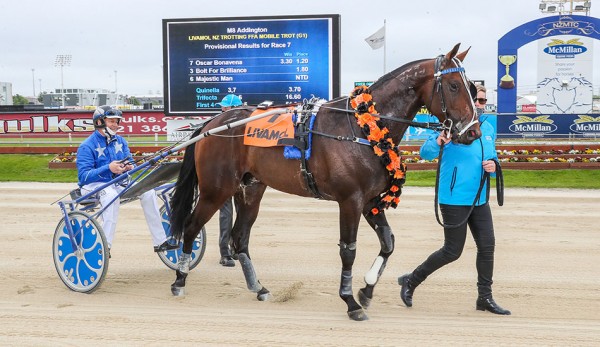 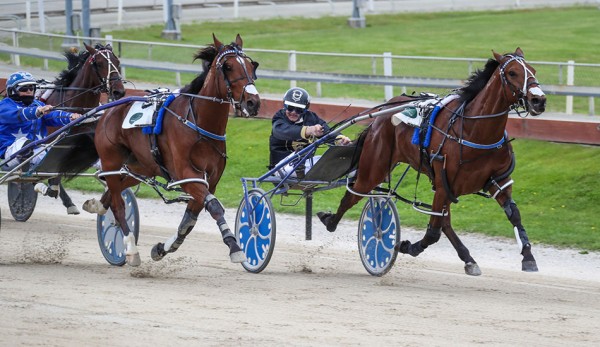 Purdon makes it six! Franco Indie was backed into $1.40 to win the $170,000 Woodlands Stud Group One Sires' Stakes final and he did it tough. It was Mark Purdon's sixth win for the afternoon - he's co trained five of them. Casino Action and stablemate Republican Party were lead-trail, forcing Franco Indie to sit parked. He had to work hard to get past them and then he had to withstand a late surge from stablemate Franco Mac (Natalie Rasmussen).

It was a gutsy effort, and his fifth win in six starts. The winning margin was a half head, the winning time 2:20.20. 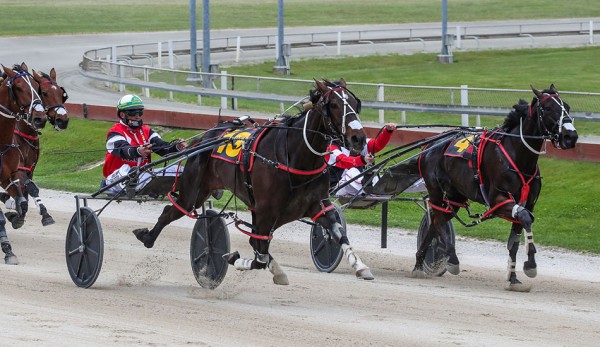 New York Minute started a $3.60 favourite in race 9 but it was Archway ($14.90)  who got the last shot at them and had a clearcut win for Blair Orange. It was a Robert and Jenna Dunn-trained quinella with Soundsofcash. It was Orange's second win for the day following his success with Krug. Yorokobi was third, with the 13:4:8 trifecta paying $1,499.50. 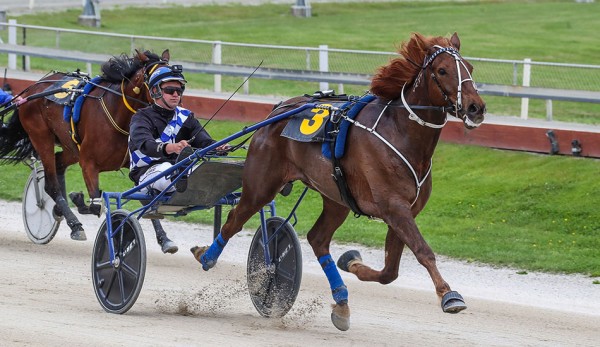 Love N The Port was being picked by many in race 10 and their confidence was well placed. Trained by Phil Williamson and driven by son Brad, Love N The Port was fresh up, though had been trialling impressively. He gave his backers little reason to be worried as he went to the lead and kept his rivals at bay. It was his third win in ten starts.  Royal Pride ($4) and Willangus Lad ($3.90) rounded out a $266.80 trifecta. 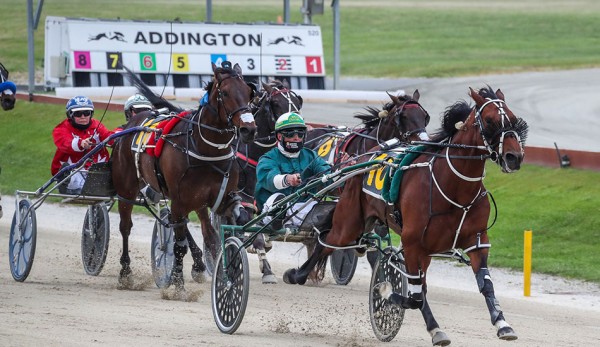 Copy That has given veteran trainer Ray Green his first New Zealand Cup. After starting safely Copy That was put into the race by Blair Orange and after that he controlled the tempo beautifully. Hot favourite Self Assured and South Coast Arden tried to push the issue but Copy That always looked to have things in hand with Orange looking increasingly confident.  The winning time was 3:58.8. It was Orange's second Cup win after Cruz Bromac but for Green it's a breakthrough win and he was clearly emotional after the race.

Speaking on Trackside after the race he declared the horse the best he's had, and was tearful when talking about the significance of the win. Self Assured was game in second place, as was South Coast Arden, after their mid race moves.  The 10:15:16 trifecta paid $34.60. 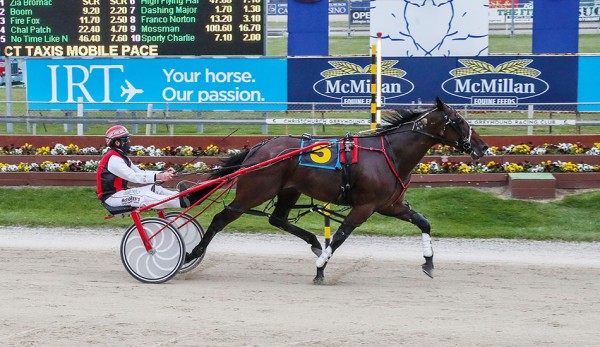 The biggest upset and the biggest winning margin of the day was in the last race. Dashing Major was a dominant favourite ($1.70) and was well in contention until the Graham Court-trained No Time Like Now sprouted wings at the 600 metre mark and left the rest of the field in his wake. Gerard O'Reilly then guided the three-year-old colt to his fourth career win in 14 starts. The winning margin was eight and a half lengths, paying $46.40 for the win and $7.60 for the place.

What a way to finish a day that saw Mark Purdon and Blair Orange take out nine of the 12 races.

Throughout the day the Box Seat Punting Challenge was in operation. But they had what they called a "brutally hard day" at the office, returning 60 cents in the dollar. The initial pool was around $110,000.