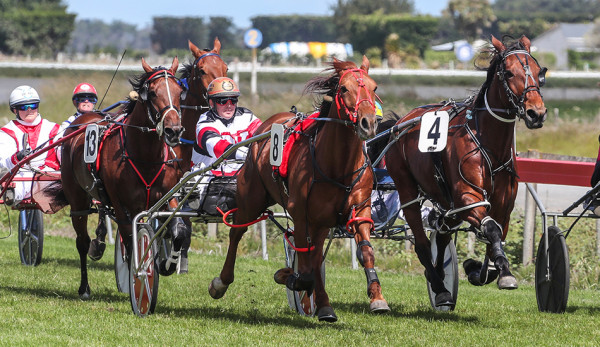 Jo Herbert wasn’t the only winner for the first time in over a decade at Motukarara two Sunday's ago.

After leaving the game for family reasons back in 2009, Herbert’s previous winner had been Valhalla at Addington for trainer Brent Lilley in June that year.

She has been working for Colin and Julie DeFilippi in recent times and returned to driving last season, winning at her 20th start back with Blue Chip Delight when the stable had three starters in the race.

Half an hour later however, Greg Manson trained a winner for the first time in 10 and a half years with his first starter since in Copperhead Rose, who was resuming after being acquired a few months ago from the late Don Jones.

Manson was helping out Jones when he became crook a few years ago, before passing away in February.

He bought then six-time winner Copperhead Rose along with the Mamas And The Papas Syndicate, a group of half a dozen parents and first time owners involved in the Prebbleton RC where Manson coaches the under-11 team.

Manson and wife Karla have children now aged 10 and 11.

With friends and other supporters, this meant there was an enthusiastic and rather loud group of 60-70 people on hand to cheer on Copperhead Rose and Jonny Morrison in the Crate & Barrel Leeston Mobile on Sunday.

Equally important for Manson though was the fact that Copperhead Rose was wearing the colours with the big ‘BV’ that are a tribute to his late friend and noted cancer campaigner Blair Vining, who passed away aged 39 in October last year.

Vining spent the last year of his life advocating for better cancer treatment, particularly in Southland, and setting up a Charity Hospital there.

The red, black and white colours come from the Midlands RC in Winton where Vining played 250 senior games and his passion for sport led him to also set up a Foundation to help develop local young talent.

Manson befriended Vining while working in Winton for a few years after Karla, a hairdresser, had got to know Vining’s wife Missy.

“You tend to do a lot of socialising in places like Winton and Blair became one of my best mates,” said Manson.

“There’s a group of us that still meet and catch up at Christmas in Twizel every year.”

Manson had 13 wins when he was living in Belfast near Christchurch and had good horses in Sirhakazz and Lord Marmaduke.
The Ermis gelding Sirhakazz won three of his first seven races for Manson before being sold, while a bit later he won six races with the D M Dilinger horse Lord Marmaduke.

Sirhakazz and Lord Marmaduke were bred and raced by Manson’s father Russell and were the first two foals from the Worthy Del mare Envase.

Lord Marmaduke would later win a Waimate Cup for Colin DeFilippi and another race for Jonny Cox after Manson had departed for Southland in the middle of 2009.

“I got married and started raising a family, so I had to get a real job and I started up a truck driving business, which involved transporting fish to Christchurch for Kyp Kotzikas’ United Fisheries.”

Manson moved back to Lincoln near Christchurch five years ago and is still running that business, also for Ngai Tahu.

That was when he began helping out Jones by trekking out to Greendale near Hororata every second day while also doing fast work at Kotzikas’ Lavros Lodge at Yaldhurst.

“Don used to run the freighting side of things at United Fisheries and was my boss for at least a dozen years.

“That’s what led me into helping him out with the horses and even when I was living in Belfast and working the likes of Lord Marmaduke at the beach, I would also take him over to Lavros Lodge to work with other horses.”

When Manson returned to Canterbury, he was also working Jones’ good mare Karanga Red Fantasy, a winner of seven races with one at Orari five years ago when she paid $73.

Jones’ son Norm has been learning the ropes at Lavros Lodge with a view to taking over the horses and Copperhead Rose had a couple of starts for him back in July.

Two years ago he won at Addington on Show Day and then at Orari off 20m, but on Cup Day last year, in the race won by Amazing Dream, Copperhead Rose did a tendon.

“I’ve had some nice horses in the past but Copperhead Rose is just an absolute pleasure to do anything with.

“He’s still a bit of a goof but he’s got a very big heart.

“He only does what he has to and he never wins by much.

“I’ve gave him a long slow build up and the syndicate was hoping to race him on Cup Day, but when I realised he wasn’t going to be quite ready, I waited for a grass track.

“That was going to be a lot easier than racing good horses first up at the Cup meeting at Addington with the times they were going.

“I’m setting him for the Akaroa Cup at Mot next weekend now.

“He’s better suited to the stands as he’s such a great beginner.”

Copperhead Rose is a chestnut gelding by the Western Ideal horse Vintage Master and the best of his 15 winners from one crop of 46 foals here.

His other good performer in Mad Lu Li won her fifth race for Katie Cox earlier at Motukarara on Sunday.

Copperhead Rose is the first foal from Reklis Millions, an unraced daughter of Iraklis that the Jones acquired from Kotzikas who was one of five non-winners from Lavra Millionairess.

The latter was by Frugal Gourmet and one of 14 foals from Millions And Millions, who must have cost about that much with just three minor winners.
So it’s not much of a pedigree and Copperhead Rose can be considered one right out of the box.

Copperhead Rose had two workouts where Morrison drove before he resumed on Sunday, where he was sent out favourite from barrier eight in the 2000m mobile event with a preferential draw.

Morrison went back to the rear but settled in the three-wide train and eventually took over with 900m to run.

Glen Elgin Tomson and Blair Orange from three fence drew level and perhaps headed Copperhead Rose close to home, but the latter would not be denied and came again right on the line to score by half a head.

Manson has a 450m track at Lincoln and these days does his fast work at either Motukarara or Lavros Lodge.

At the moment he has only one other horse in work and that is a four-year-old son of Lord Marmaduke, although official records show he has not sired any foals.

“He’s the most magnificent horse you could ever hope to see.

“He’s not even branded and really only just broken in.

“You won’t be seeing him until he’s a five-year-old but you will be seeing a lot of him.

“He’s one of a kind as I bred two foals by Lord Marmaduke and the other one got caught up in a fence.

“Lord Marmaduke is still in the front paddock – here we find homes for horses.”

Copperhead Rose will thus be joining Lord Marmaduke in that front paddock one day, once he’s done his dash at the races. – by Frank Marrion

Josh Dickie makes big decision to move across the Tasman

One of New Zealand’s most talented young harness trainers is moving to Australia in a shock decision that will see Josh Dickie officially stop training in NZ from tomorrow.