Career first for Austin to kick off 2022

It‘s a case of “so far so good” for Canterbury-based trainer Rodger Austin in 2022.

A trainer since the early 1990s he produced his first ever quinella yesterday at Nelson when Idle Stuartia edged out stable-mate Mikemaro in race 7, the Super Liquor Motueka.

“It was certainly nice to get it,” says Austin.

Mikemaro, driven by Jim Curtin, led initially only for Idle Stuartia and Blair Orange to go round the stable-mate and lead with a lap of Richmond Park to go. Turning for home Mikemaro peeled out to issue his challenge, but Idle Stuartia held on by half a neck. They were more than three lengths clear of their closest rivals.

“It was an easy watch really, they both had good runs.” 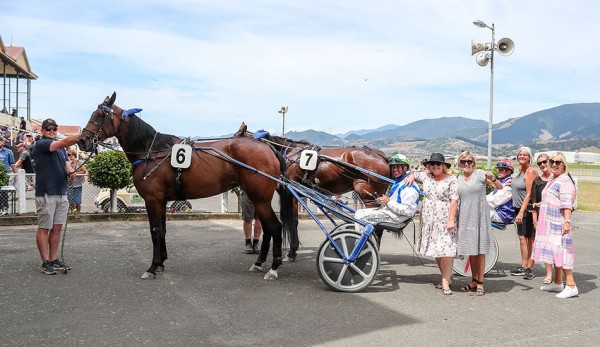 The Austins have been long associated with the “Idle” breed, including six-win trotter Idle Monkey.

“He was probably the best of them,” says Austin, “and injuries meant we probably didn’t ever see the best of him.”

In race three at Nelson, Austin was third with B J Lindenny in the race named in honour of his father, the Mike Austin Memorial Trot. Mike Austin died in 2017.

On the first day, on Friday, Austin also achieved success with A Rocknroll Dance three-year-old, Donmaro, who won impressively on debut.

All in all it’s been a fruitful start to the year.

“Too right it has,” says Austin.

2022 will see a big change for Austin. After being a fulltime farrier for around a quarter of a century he’s stepping away from it in March, and will devote his time to his Templeton-based business, Austin’s Farrier Supplies.

“It’s a hard job and I’ve got a few back problems so it’s time to move on.”

But he has no plans to step away from training. Currently he has five horses in work.

“I’m a hobby trainer really but I love it – it’s fun and it’s something I’ve always done.”