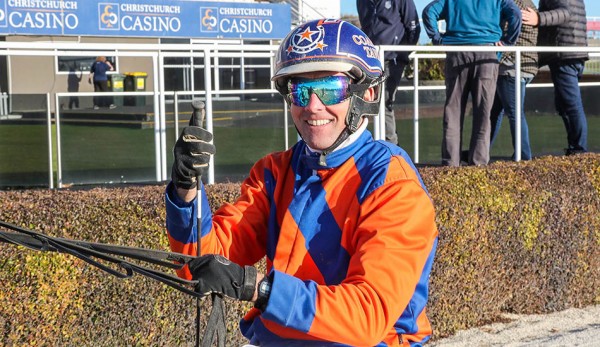 Kyle Cameron expects to cop a little bit more flak despite reaching 100 wins in the sulky at Addington on Sunday.

Cameron went into the meeting on 98 wins before producing a training and driving double with Big Mamma Morris and The Optimist.

The horseman had been stuck in what would be referred to in cricketing terms as the nervous nineties for longer than he had liked.

With HRNZ posting upcoming trainer and driver milestones to Facebook regularly, he had been copping a bit of good natured banter from some of his peers.

Despite knocking off his 100-win target Cameron still expects the ribbing to continue.

“We have been chipping away, it has been posted on Facebook by HRNZ and I have been copping it from everybody for weeks.”

“I hadn’t shifted off 98 ever since they started posting it, so I finally got that monkey off my back.”

“But then Henry who works for me just told me I just got to 47 training wins, so we will probably be back on the list next week.”

The Optimist won her first race for Cameron on Sunday to seal his 100th win when powering down the outer to score at $26 odds.

“She really tried and put in, I put go straights on her – she does brush a knee a little – whether it just helped her confidence – she really travelled good and then just came out and tried.”

“A couple of times in behind she felt like she hadn’t put in that much, but I guess it was probably the right grade for her and she had a nice enough run.”

“I was more than happy with her, it was probably the highlight of the day.”

Cameron went into Sunday’s meeting with some concerns about Big Mamma Morris over-racing in her last start.

But it soon became apparent that it was not going to be an issue at all.

“It was funny, when she first went out on the track she didn’t pick the bit up at all and I thought this is going to be interesting.”
“She was just nice and relaxed in the running and when I pulled her out she really felt a million bucks.”

“It couldn’t have gone better for her.”

A big group of owners had plenty to cheer about when Cameron was able to deliver a deserved maiden victory with the four-year-old.

“The owners loved it, there was a big pack of them there and they were all in good spirits.”

Cameron only lined up three horses at Sunday’s meeting with his remaining runner Tequila Sunset running on into second placing.