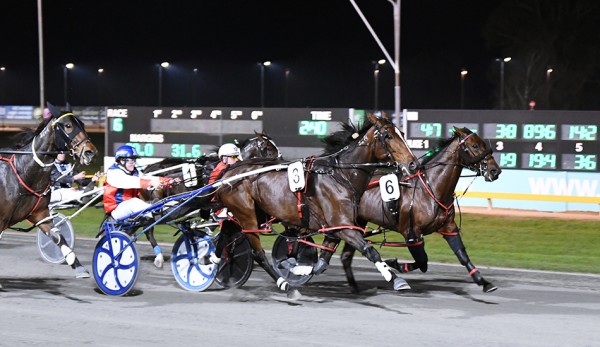 There’s a burgeoning rivalry developing at Cambridge Raceway and it’s just starting to heat up.

Local junior drivers Alicia Harrison and Luke Whittaker have drawn level at the top of the North Island junior driver standings after Harrison recorded a winning double at her home meeting on Thursday night.

She opened her account behind the Matthew White-trained Emmber in the Cambridge Homes Mobile Pace (2200m).

The daughter of triple Group One winner Lauraella had to do it tough, sitting parked throughout, but she was able to draw on all her reserves to get up by a head over Jaccka Cooper, with Hooray Henry a further three-quarters of a length back in third.

“Emmber had to do it quite tough, but she was quite on the bit and not as relaxed as I would have liked her to have been,” Harrison said.

“Thankfully she dug in and stuck on really well. It was a really good effort from her.”

Harrison was back in the winner’s circle saluting the judge in the following race after an all the way victory behind the Steve and Amanda Telfer-trained Sarandon.

“It was a super effort from Sarandon,” Harrison said. “She is just a tough, wee mare. She tries her heart out.

“She is only pony-sized, but I would love to have a heap of her around. She is such a cool, little horse.

“The Telfers have been exceptional and every time you get on one of their horses you know it’s going to be in with a winning chance.”

Her double brings Harrison’s season tally to 16 wins and on equal terms with Whittaker, who works for Cambridge trainer Mike Berger.

“I was getting worried because he (Whittaker) had quite a few nice chances tonight. It is good to be back on level terms and now hopefully I can keep it ticking along,” Harrison said.

Harrison is enjoying her best season to date and is relishing driving at premier meetings, most recently behind New York Minute in the Gr.1 Taylor Mile (1609m) and Gr.1 NZ Messenger Championship (2700m).

“The first night I was so excited, and then it rained, and it was awful out there,” she said. “But it was awesome to be out there.

“He went a great race in the Messenger, but unfortunately we got shuffled up and couldn’t get into it.”

Harrison is looking forward to continuing her duel with Whittaker for top North Island junior driver honours, but she is also excited about the prospects of driving on Harness Jewels Day at Cambridge Raceway next month.

“I am excited for the Jewels,” she said. “A mile is probably not New York Minute’s go, but it is pretty cool that he has made the race and that I will have a drive on a big day like that at Cambridge.”