Butcher out for Group One glory 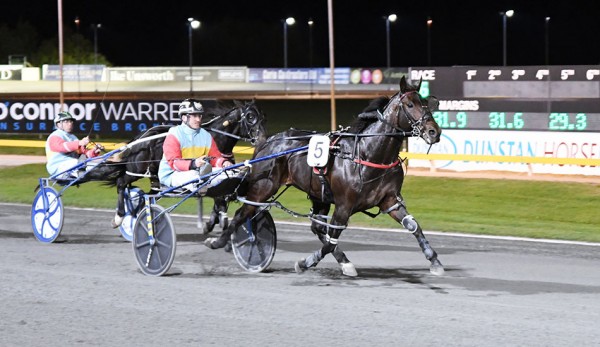 Fresh from his 800th driving success at Cambridge last night with Eagle Watch, Zachary Butcher is now after his first Group One win as a trainer.

He already has the best part of 20 Group Ones as a driver.

The South Auckland horseman had plenty of success with Zeuss Bromac two years ago when he trained and drove him to a win and two placings in New Zealand, including running third in the Gr.1 2YO Emerald (1980m) at Addington Raceway.

He subsequently travelled to Australia with the son of Bettor’s Delight where he placed in the Breeders Crown 2YO Colts and Geldings heat and semi-final, before running fourth in the final.

The now four-year-old is part-owned by Lynette Philpott, who also owns Call Me Trouble, who will give Butcher his first chance at Group One trotting glory at Alexandra Park on Friday.

The five-year-old son of Superfast Stuart will contest the Gr.1 2021 “What The Hill” Rowe Cup (3200m) and Butcher is excited about his prospects in the two-mile feature.

He heads into Friday in good form, having won and placed in his last two starts, and in March he proved he was up to racing top-class company when finishing fourth in the Gr.3 Greenlane Cup (2700m).

“It’s nice that we have managed to get hold of a horse that has done a good job, and it’s nice to have one in a big race,” Butcher said.

“It is going to be pretty tough against Sundees Son and there are about four or five that are probably a class above him, but it’s 3200m.

“If I can stick him on the fence or cuddle him up and if a few of them do a bit of work and he can follow that speed, he won’t be far away.”

While Group One success is nothing new to Butcher as a driver, he said it is a whole different feeling training in the lead-up to an elite-level target.

“When you are a driver you just have to look at that field and do your form on those other horses, but as a trainer it’s all the extras that you have got to do through the week,” he said.

“Trainers deserve every dollar they get because it’s a lot more stressful than driving them.”

While excited about the Rowe Cup, Butcher also has a couple of other feature drives on Friday.

He is particularly excited about the prospects of the Barry Purdon and Scott Phelan-trained Bad To The Bone in the Gr.1 Dawson Harford LTD 2021 NZ Messenger Championship (2700m).

The gelding finished second behind Copy That in the Gr.1 Taylor Mile (1600m) last week in his New Zealand resumption after a couple of months campaigning in Australia.

He has drawn barrier five for Friday’s feature and Butcher is slightly disappointed that a few competitors sporting the Jewels silks - Copy That and Amazing Dream - have drawn inside of him.

“He went super last start over the mile,” Butcher said. “It’s a bit of a shame that the ones to beat have drawn inside of us, but that’s the way it has turned out.

“If they go hard and he gets a nice drag into it, he will be right in it.

“He is tough. I think that Menangle racing has got him really sharp for these couple of races and it showed in last week’s run that he is right up to them.”

He wasn’t complimentary of his drive behind her when finishing seventh in the Gr.1 Caduceus Club Fillies Classic (2200m) in inclement conditions at Alexandra Park last week, and is hoping to make amends on Friday.

“It was driver error last start,” he said. “I was pretty disappointed with my drive. She was pretty unlucky in the run home and the conditions weren’t great, so I couldn’t really see where I was going. Had she had a bit more luck I think she would have been right there.

“Hopefully things can go her way on Friday and if she gets the right run and is following the right horses, I don’t think she will be too far away.”

The connections of in-form trotter Musclyn are starting to reap the rewards for their patience with their four-year-old mare and they are hoping her purple patch of form continues in the Goodwin Contracting Trot (2000m) at Rangiora on Sunday.