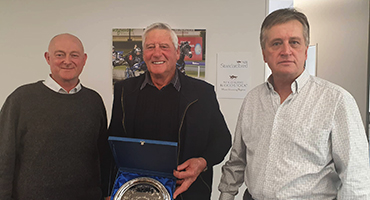 South Island Freeze brander John Boyd has been recognised by Harness Racing New Zealand for his massive half-century of service to the industry.

A presentation was made to Boyd at HRNZ headquarters recently, as he signs off from his 50-year role as the man in charge of branding foals in the upper South Island.

The Cantabrian has stepped down and is in the process of helping his replacement, Paul Black, getting started in the job.

Boyd has been responsible for the branding of foals born between the top of the South Island and as far south as Waikouaiti during his lengthy tenure.

HRNZ have estimated he has branded an incredible tally of more than 83,000 foals.

Boyd admitted he has enjoyed every minute of working away through that massive total.

“It has been a great innings and I have really enjoyed it.”

Boyd has not only branded every champion racehorse born in the South Island in the past half century – from Lazarus to Lord Module, Courage Under Fire and Lyell Creek.

He has also had an up close view of the massive change the harness racing industry has seen in the past 50 years.

And few would have had a better look at how standardbred breeding has seen foals evolve in to finer and sleeker racing machines.

“A lot of the stallions coming in now, they are really made for speed.”

“Years ago, when you had Holmes Hanover and those stallions, they were a heavier horse and they would stay all day.”

“But, now, these stallions that are coming in have great mile rates and they are built for speed.”

“And people don’t want to hang around, years ago you could have a trotter or something like that, that didn’t come right to it was 4yrs-old.”

“Now they want them up and running as 2yrs-old.”

Boyd has also witnessed the decline of breeding numbers from healthy levels the concerning state they are currently in.

“I used to go down to Oamaru and stay there for three days.”

The breeders of yesteryear provided some of the highlights of Boyd’s career.

His work would have him travelling to country stations all around the upper South Island.

“You had the cockies that had big farms, they would be breeding seven or eight foals.”

“You would go there and have lunch and have a great time.”

“Nowadays it is a bit different, most of the foals are at the studs.”

The farms he used to visit have also provided Boyd with some of the most comical moments of his career.

“The cockies would have the mares and foals in the sheep yards and all of a sudden they would have jumped over to the next four or five sheep yards.”

“I was asked the other day about seeing that sort of thing, they caught me on the hop.”

“I wish I had started writing a book when I first started – I reckon it could be a best seller.”

The end of Boyd’s career as a freeze brander does not mean the horseman will not stop working with horses.

He will be kept busy helping at the stables of his son, Stephen.