Blameitonthenight to the fore at Cambridge

The two-year-old colt had won on debut back in May at Alexandra Park and was first-up after a couple of workout placings at Pukekohe, including a third behind race rivals Major Perry and Montana DJ.

From his outside draw in the six-horse field, driver Peter Ferguson elected to ease back and sit off the pace while race favourites Major Perry and Classy Operator burnt early for the lead, with the latter getting the upper hand.

Ferguson continued to bide his time at the rear of the field until he launched his charge three-wide at the bell to sit outside leader Major Perry.

The pair were eye-to-eye turning for home but Blameitonthenight responded to the urgings of Ferguson and got up to win by three-quarters of a length over Major Perry, with a further nose back to Mr Ibiza in third.

“I was rapt and Peter drove him really well, it was a great result,” trainer Tony Herlihy said.

“They are tricky little races those six horse races and Peter summed it up well. He was fresh-up so I was pleased with the way he stuck to his guns.

“I have always had a bit of an opinion of him and he is justifying that.” 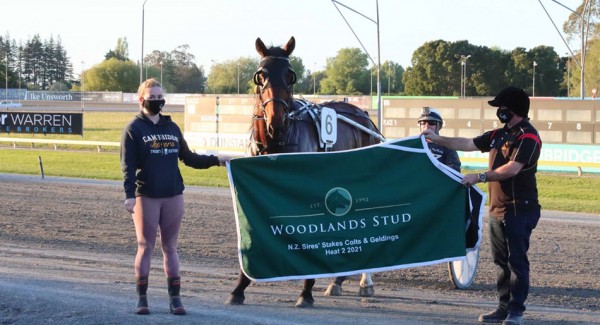 By champion pacing stallion Bettor’s Delight, Blameitonthenight boasts a royal pedigree, being out of 2008-09 New Zealand Two-Year-Old Pacing Filly of the Year Gotta Go Harmony, a daughter of six-time Group One winner and 2001-02 New Zealand Harness Horse of the Year Elect to Live.

“It’s a great breed,” Herlihy said. “Todd Anderson’s Taffy Bloodstock bred him and they got the right combination.”

While pleased with Thursday’s result, Herlihy is already looking forward to racing at Addington Raceway on Friday night where stable runner Bolt For Brilliance will be fresh-up in the Gr.3 Canterbury Park Cup (2600m).

The last start Group One winner will come up against some stiff opposition, including a race hardened Sundees Son, as well as Group One winners Majestic Man and Muscle Mountain.

“He is a champion horse Sundees Son,” Herlihy said. “If we can keep close to him we will go a good race.”

Herlihy said Bolt For Brilliance has settled in well to his new surroundings at Jim Curtin’s Templeton barn, with the Canterbury horseman set to take the reins on Friday in Herlihy’s absence as a result of COVID-19 border restrictions.

“He has travelled down well apparently and is staying at Jimmy Curtin’s place,” Herlihy said.

“He said he has settled in really well down there. I thought he would, he is pretty easy to look after and handle, hopefully he has a bit of luck and goes a good race for us.”