Big clash not far away 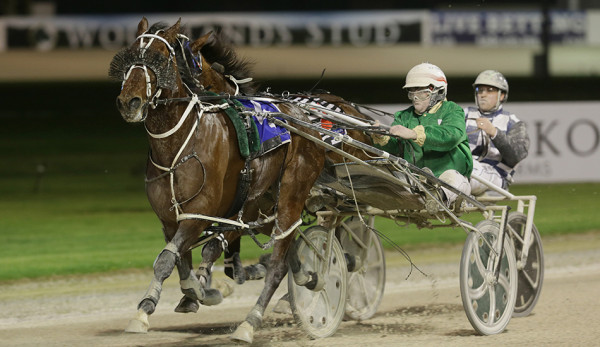 Trainer Ray Green has some good news about his great horse.

Because southern fans may not have to wait as long as they thought to see the first clash of pacing two excitement machines Copy That and Self Assured.

Copy That was even more dazzling winning at Alexandra Park on Thursday night than he has been so far this campaign, overcoming being roughed up early to zoom clear of some serious horses at the top of the straight.

The four-year-old looked certain to be vulnerable after an early burn with Inter Dominion runner-up Mach Shard saw them record one of the fastest opening 600m of a 2200m mobile at Alexandra Park.

But while Mach Shard dropped out, Copy That exploded clear to win in a stunningly fast 2:36.4, a 1:54.5 mile rate with a 27.8 last quarter and driver Maurice McKendry certain he could have gone faster.

“Maurice said if he had given him a tap with the whip he could have won by two or three lengths more,” said trainer Green.

Copy That still put two and a half lengths on Check In and Dance Time, both of who were good and definitely better than their higher-rated stablemate Triple Eight.

“I was happy with two of my three but I still think Triple Eight can go better,” said trainer Steve Telfer.

But while a lot can change on the road to the New Zealand Cup it is getting harder and harder to see how any of Copy That’s northern opponents will be coming from behind him to beat him any time soon.

He has developed real toughness to go with his massive motor and looks an all-round pacer now with just some more distances races needed to prove his credentials.

The son of American Ideal will now have nearly three weeks away from the races before the Spring Cup and then Green says he could head south to aim at the Ashburton Flying Stakes it what would, all going well, be his first clash with Cup favourite Self Assured.

“I’d like to get him to Ashburton then the Cup trial,” says Green.

The possibility of the two stars, unbeaten this season, clashing in the Flying Stakes would put the race back to what has been for much of the last 20 years, the race that decides favouritism for the New Zealand Cup.

Self Assured undoubtedly deserves that honour at the moment but if Copy That can get in front of him in any race, even the New Zealand Cup, he is going to take an enormous amount of running down.

Meanwhile, Thursday night was a successful one for Green with American Dealer and Captain Nemo into the Sires’ Stakes Final on September 18 while Tommy Lincoln recorded a career best 2:38.4 to down some talented intermediate grade rivals.