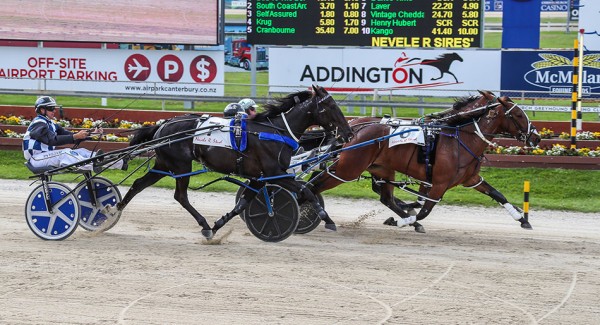 It was a day for front-runners at Addington Raceway on Friday and Bettor Talk Art continued that trend when winning the Listed Nevele R Sires’ Stakes Southern Classic (1980m).

Driver Robbie Close was positive off the mobile arm with the filly and the pair were able to take an early lead where they were able to dictate the tempo throughout.

They were kept honest by race favourite Darling Me, who improved to sit parked outside the leader with a lap to go, however, Bettor Talk Art showed her class when sticking on to win by a head over A Taste Of Honey, with a further neck back to Darling Me in third.

Trainer Regan Todd was rapt with Bettor Talk Art’s run and was full of praise for Close’s drive.

“She went really well,” he said. “She did a bit of work early and it was a good effort to hold them, they bowled along the whole way.

“He (Close) drove her like one of the better ones and it worked out in his favour.”

Bettor Talk Art took two placings from as many starts into the race and Todd said she needed those hit-outs and her Cup Day trial to peak for Friday’s race.

“I have been quite happy with her, she had just taken a few runs to come to it,” Todd said.

“It probably looked like she went average at Ashburton but the time that they were going she was never going to get near those first two (Darling Me and Pelosi).

“She trialled super at the Cup Day trial, so she was ready to rumble.”

Looking ahead, a trip to Auckland next month could be on the cards for the daughter of Bettor’s Delight, however, Todd said he is happy enough to stay closer to home over Christmas.

“I don’t want to overtax her too much,” Todd said. “We might look at Auckand, although we may give that a miss, there will be plenty going on down here hopefully.”

Todd was also happy enough with the efforts of stablemates Cheezel and Dracarys despite finishing towards the rear of the field, citing draws as their main obstacle.

“They just need a bit of luck,” he said. “Hopefully we can start getting some draws with them and they won’t be far from picking one up.”