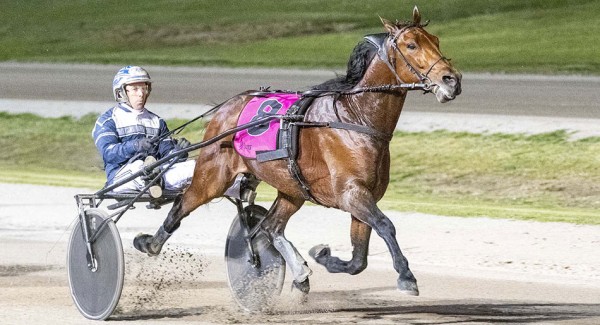 It's all happening for dominant training force Emma Stewart and Clayton Tonkin.

A treble at Bendigo’s metropolitan class meeting last night (Saturday) rolls into a truckload of its brightest stars, headed by Tough Tilly, stepping-out at the Melton trials tomorrow (Monday) night.

Heading the Bendigo treble was exciting four-year-old trotter Cover Of Darkness, who boasts 10 wins from just 13 starts when he burned around the field early to find the front and won in a slick 1min58.2sec mile rate for 2150m.

“He’ll still keep improving, with fitness and experience,” Tonkin said. “He’s got through the classes so quickly and he’s still learning about it all.”

Moran is emerging as a key player for the stable given his other regular drive, brilliant filly Ladies In Red, is closing to resuming from a long spell as she heads towards the Victoria Oaks, Breeders Crown and Vicbred series.

Kate Gath, who has been doing the bulk of the Stewart/Tonkin driving, partnered the enigmatic Struve to a brilliant win last night.

Ride High is close to resuming, but whether she drives him again remains to be seen. That’s because Gath and husband, Andy, have open-class pacers like Wolf Stride, Tango Tara and Pacifico Dream she will be committed to.

Maybe Moran is the front-runner to drive Ride High when he returns?

And his exciting four-year-old mare Alta Louisa snared the Group 3 feature, the $30,000 The Schrader, at Gloucester Park last Friday night.

Driver Gary Hall Jr has built a superb relationship with Prentice and was at his brilliant best with a smart and aggressive drive from outside the leader on Alta Louisa.

Favourite Born To Boogie got clear of a pocket in time, but Alta Louisa kept finding and held a neck margin to the line in a 1min57sec mile rate for 2130m.

It was Alta Louisa’s seventh win from just 14 starts and stamped her as one of the better mares in WA.

Classy three-year-old filly Always An Angel gave Prentice and Hall Jr the second leg of a double together when she did all the work and dug deep to nab main danger, Three Rumours, right on the line in the eighth race on Friday night.

Meanwhile, Prentice also has one of WA’s best three-year-olds in Mighty Ronaldo, who is raced in similar interests to Alta Louisa and Always An Angel.

On the same card, former Victorian pacer Perfect Major scored one of his best wins since being transferred to Ross Olivieri when he won the free-for-all.

The five-year-old son of Art Major has won nine of his 23 runs for Olivieri, but it was a huge effort to burn early, sit parked for the last 1000m and gun-down leader and favourite Vampiro in a sizzling 1min53.4sec mile rate for 1730m.

But the way his 12-horse “satellite” team is going at Menangle, maybe there is no rush.

Aiken, who trains a big team with son Josh in Victoria, planned to spend a month with a few horses suited to Menangle racing, but the COVID-19 crisis in Victoria and NSW basically has him stranded at Menangle.

Stable star Max Delight took a couple of runs to hit his straps, but he made it two good wins in a row at Menangle last night.

It was an Aiken quinella with another of his best pacers, Malcolms Rhythm, producing the run of the race for a close second in a 1min52.1sec mile.

The feature race of the night, the Group 3 August Gift Final, went to young former Kiwi trainer Jack Trainor and his emerging gelding Spirit Of Anzac. Blake Fitzpatrick took the reins in an all-the-way 1min52.8sec mile.

Spirit Of Anzac is unbeaten in three runs for Trainor, who continues to impress in training ranks on top of his deeds as a driver.

The 17-year-old, who has been impressing from limited opportunities on the NSW regional circuit, not only drove his first metro Menangle winner, but iced it by snaring a double last night.

Green’s first win came on Major Obahma in race two and he followed four races later to land a huge plunge ($9 into $2.60) aboard Zanadu in race six.

Fittingly, both were trained by Dean and Kerry McDowell, who have been the backbone of Green’s emergence.

There is some dash in those old legs yet.

It seems a lifetime ago when Our Uncle Sam ran second to Tiger Tara in a Hunter Cup and Melbourne Inter Dominion final.

He hasn’t kicked-on as connections hoped since, but the seven-year-old found winning form again at Albion Park last night.

In a thrilling three-way finish, Our Uncle Sam won by a whisker from local Will The Wizard with another nose to favourite and former Kiwi pacer Mach Da Vinci.

Just behind them in a close-up fourth after coming from last was another former Kiwi, Tommy Lincoln.

The other winner of note at Albion Park was Grant Dixon’s comeback four-year-old Governor Jujon.

Governor Jujon won 17 of his first 23 starts before a setback and lengthy spell, but has returned with a close second and narrow but impressive win last night.

The son of Cammibest sat parked and just kept finding to win by a half-neck in a slick 1min53.4sec mile rate for 1660m.

It was built as the showdown between two of Victorian trotting’s young glamour girls, but Chris Alford had other ideas.

Aldebaran Tess ruined her chances by galloping at the start, while Im Ready Jet looked flat after her fantastic win the previous week and could only manage fifth.