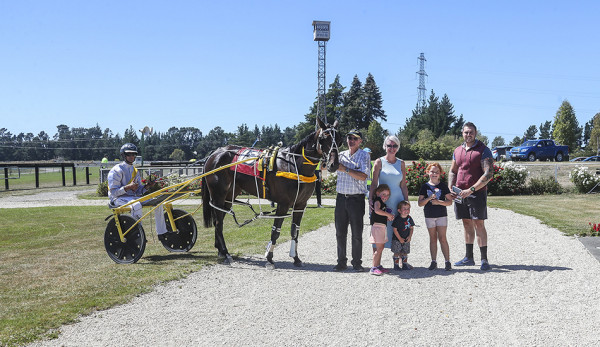 You could be forgiven for thinking Angel Of Montana sprouted wings down the home straight at Rangiora on Saturday.

The Bettor’s Delight filly flew home late from the rear of the field to nab Haiti Franco on the line to win by a half head.

It was Stephen Anderson’s first training win and he was delighted with the result.

“I was pleased to get it off my back. I am very happy about it,” he said. “She was very good today, particularly after drawing the second line.”

Angel Of Montana finished runner-up first-up for Anderson at Oamaru last week and he said a gear change assisted his filly on Saturday.

“I put the pulldown blinds on her today and Robbie (Close, driver) thought that made a difference,” he said.

“She didn’t take the passing lane at Oamaru as quick as she should have, but she was still fighting at the end.”

Previously trained by Barry Purdon and Scott Phelan at Clevedon, Angel Of Montana came into Anderson’s care after his grandson, Connor Harker, thought he needed an interest in another horse after selling his only stable runner, Social Media, offshore.

Harker saw Angel Of Montana on online auction house standardbred.gavelhouse.com and thought she fitted the bill, going to $12,000 to secure the former northerner.

Anderson has fallen in love with the mare and said she is a complete contrast from her more boisterous stable predecessor.

“My grandson and his mate bought her off gavelhouse for me because I sold Social Media to Australia. He reckoned I needed something to do, so he bought her,” Anderson said.

“She is a beautiful horse to do anything with. Social Media was either trying to bite me or kick me. This one is a totally different horse altogether.”

Anderson said he fulfilled a lifelong ambition on Saturday, with the former dairy farmer wanting to carry on in the training footsteps of his father, John Anderson.

“I did that in honour of my old man, I was using his colours,” Anderson said. “That was my ambition – to get a horse on the track and win a race for him.

“I took my license out just a bit over three years ago. It was a bucket list thing, I have always been interested in racing, but I was dairy farming most of the time and I didn’t have the time to do that sort of thing.”

Angel Of Montana is the only horse Anderson has in work, but he said he enjoys getting up to work her at Ashburton Raceway every morning.

“We live in town and I am training out of the racecourse at Ashburton,” he said. “I am in a barn with Terry McMillan, who gives me good advice, and Nigel Perkins. I enjoy the comradery between us.”