Smiles were back on the faces of the Stonewall Stud team at Methven on Sunday when Allamericanlover was a dominant winner of the Hororata Cup (3000m).

The Steve and Amanda Telfer-trained mare gave the dual-Island barn a bit of concern after the way she pulled up following her fourth placing in the Gr.1 NZ Breeders Stakes (2600m) at Addington Raceway last month, but showed she was back on track on Sunday.

“She pulled up quite distressed after the Group One race and was a bit crook. It was an out of character run,” Amanda Telfer said. 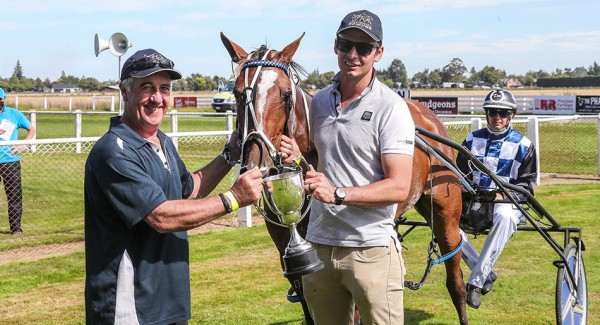 The daughter of American Ideal settled towards the rear of the field from her 20m handicap on Sunday where driver Tim Williams sat patiently until he sent her forward with a lap to go and she wrestled the lead down the back straight.

The four-year-old mare put six lengths on her rivals down the home straight but bobbled with a few hundred metres to go. She regathered herself to win by 3-1/2 lengths over Got You Covered, with a further three quarters of a length back to Homebush Lad in third.

“Tim handled her beautifully, it was a great drive,” Telfer said.

“I asked Tim what happened (when she bobbled) and he said she probably wasn’t concentrating as much as she should have, but it’s nothing to worry about.

“It is good to have her back on track and now she will hopefully head towards the final.”

The final is the Country Cups Final which will be run at Addington Raceway next month for $100,000.

While that race remains the key goal for Allamericanlover, Telfer said she will likely head to Southland in a few weeks time to cement her spot in the race.

“In two weeks time she will probably go down south,” she said. “There is a Cup down there that she can get penalty free with Ellie Barron driving.”