A fitting tribute to Heather Williams 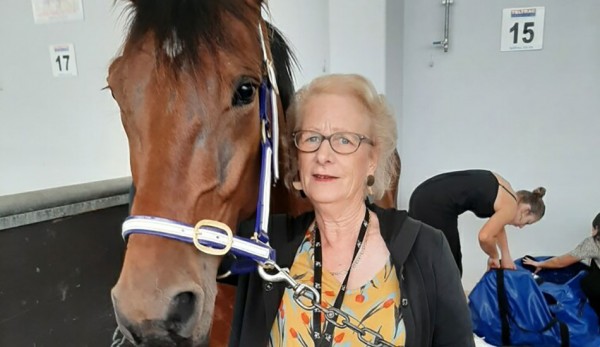 Haras des Trotteurs is sponsoring a fillies and mares race at Addington on Friday night in honour of prominent trotting personality Heather Williams, who with her husband Lex Williams bred and raced such notable trotters as One Over Kenny and One Over Da Moon.

Heather passed away from a short illness in November last year, and her husband Lex approached Pat Driscoll with a view of putting on a race in her honour, and this week the inaugural Haras des Trotteurs Heather Williams Memorial will be raced at Addington.

“I wanted to do something positive for fillies and mares and recognize the work that Heather did in the industry,” said Lex from his home in Ocean View Beach, Dunedin, this week.

Fillies and mares trotting races are thin on the ground in New Zealand, and Williams' initial idea was to provide a mile race so that they got the opportunity to post a mile time, but mile races at Addington are problematic because of the start position, and Ashburton could not find a place on the calendar for it. So a compromise of 1980m at Addington was agreed upon.

“I came up with the idea for the race and approached Pat to see if he would support the race, and he agreed to match my contribution, which is exceptional really.”

Williams says the race with a $20,000 stake is close to a listed race and hopes to get the race to that level in the near future.

Lex has been active in racing administration and was President for the Waimate Trotting Club for a decade, while Heather was also actively involved behind the scenes.

“She was a very big part of it for 20 years. She was always very involved in the breeding, and also in the preparation of the yearlings,” Lex said.

Heather loved horses, although that was not that way when they were first married, Lex says.

“She was actually scared of them, and didn’t like them at all,” says Lex but in time, Heather became a wonderful horsewoman

“She loved preparing the horses for sales. She got a lot of accolades from people on how quiet and well mannered our horses were at the sales, and that was down to Heather,” says Lex.

Lex and Heather, who lived most of their life at their Waimate farm, were particularly fond of trotters, perhaps because the first one they ever bought was a certain One Over Kenny , who they purchased in the 2003 yearling sales in Christchurch.

The mare, by Sundon, won 32 races and over a million dollars including the Rowe Cup twice, among 17 black type races. She also won six races in Australia including the Group One Australasian Trotters Championship.

One Over Kenny and her son One Over Da Moon also both won the VHRC The Holmfield in 2005 and 2014, a race Lex holds a special place for.

One Over Da Moon has become a successful sire in his own right, despite limited opportunities and will have a daughter representing Lex and Heather in the Memorial race, in Samantha’s Moon, a promising type who has one once and placed three times while racing the best of this year’s 3YO fillies.

Heather, like Lex, was also a fan of the French trotter, breeding multiple times to Haras des Trotteurs stallions including Love You, Orlando Vici and En Solitaire, who stands in Southland.

“We were very big on them. There are a lot of them around.”

Heather and Lex bred the 2018 annual yearling sale topper Ultimate Stride, who is by Love You out of One Over Kenny.

“We have a lovely En Solitaire filly out of One Over Kenny and we sent her back to him this year,” says Lex, who is also breeding from mares by Orlando Vici and Love You, while he has another in foal to Love You.

“We were keen on the French bloodlines, we have always believed that they will help the breed with their gait and their temperament.”