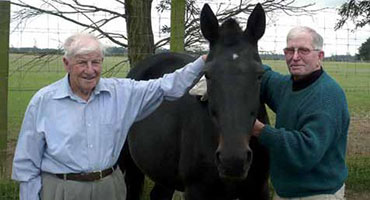 Together brothers Keith and Bevan Grice bred nearly 600 horses since the late 1940s, with their stock winning as recently as last weekend.

The Grice way was to breed and then lease, rather than racing the horses themselves.

"Their idea was to breed the horses and then make other people successful and get the enjoyment out of it," says Greg Crawford. Syndicates he's been involved in have raced upwards of 20 Grice-bred horses over the past decade or so.

"Keith was a true gentleman who was lovely to talk to and very knowledgeable about the industry," says Crawford, "but you didn't want to cross him and you know where you stood with him."

As well as producing top racehorses Keith was also known for his sense of humour, once saying "the three essentials for farming are a good wife, a good dog and a good farm vehicle."

Such was his work ethic that Keith Grice only retired in 2019 aged 93.

He left Ashburton High School at 16 to help on the family farm.

He'd earlier thought his career would go in a different direction.

"I would have liked to be an accountant," he told the Ashburton Guardian newspaper in 2019.

Instead he joined his younger brother Bevan in partnership on the family farm at Seafield, north of Ashburton. Sheep, crops, and deer were their mainstays.

Keith once said of his brother : "We've never had an argument, but we've had a million laughs."

Horse breeding started out as a bit of sideline. Racing was in the blood.

Grandfather George Grice made a name for himself as a saddle trot rider, while his dad Robert was a breeder, Uncle Ben owned and trained two-time NZ Cup winner Haughty, and Uncle Jack owned and trained 1952 NZ Derby winner Rupee.

The brothers began breeding in 1947. Their first mare Agent, a daughter of 1915 Auckland Cup winner Nelson Derby, was from foundation mare Mavis Wood, the dam of eight winners.

From Agent they bred their first winner Sayonara. Keith Grice was just 22 when Sayonara won at the Rangiora-Cheviot meeting in 1952.

And that was just the start. Records show the Grices have officially bred 593 horses and that total will top 600 with the mares they currently have in foal.

Made life members of the Canterbury Standardbred Breeders Association in 2019, they had some gems in their broodmare band, most notably Coo Doo on the pacing side, and Janetta's Pride for the trotters.

The unraced Coo Doo produced 18 live foals in consecutive years. It is still a New Zealand record. She is a Hall of Fame mare and when they stopped breeding from her in 1986 her offspring and those traced to her had won 170 races, of which 31 were six figure earners. Among her successful progeny were Barbara Del who won nine races and 12-race winner Captain Peacock, who won the 2010 New Zealand Derby, but her best performer was Palestine. 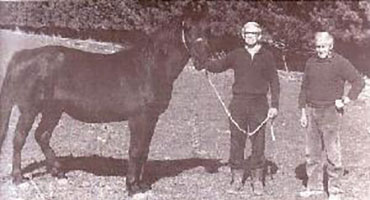 Palestine was trained by Terry May at Methven and left a lasting impression on their then teenaged son Ricky, who would go on to be one of the country's greatest ever drivers.

"When I was starting out I worked him at home, I was 15 or 16 at the time but he was a pretty nice horse." said Ricky May

"All the Grices' breed were tough."

"Over the years I saw them (Keith and Bevan) a lot floating around the trials and the races.....they bred a lot of horses."

Ima Gold Digger was out of the very successful Janetta's Pride. She had 16 foals in 19 seasons including Dependable (14 wins), Jo Anne (12 wins and dam of Derby winner Doctor Mickey) and another Derby winner in Shirley Temple (3 wins).

Another of her foals Juliana was also a broodmare gem, producing the likes of Monty Python (15 wins), Father Christmas (11 wins), and Dark Horse (14 wins). To illustrate just how long the Grices had been breeding Dark Horse was a seventh generation descendant of Agent, their first broodmare.

Sarah Palin (10 wins) was also out of Juliana and she was one of many horses the Grices gave names with a political reference. Others included Crusher Collins, Jimmy Carter and Donald Trump.

Harness Racing New Zealand would like to send its condolences to the Grice family and recognise the enormous contribution Keith Grice has made to the sport over eight decades.