Trainor upbeat about Krug's chance in Chariots Of Fire 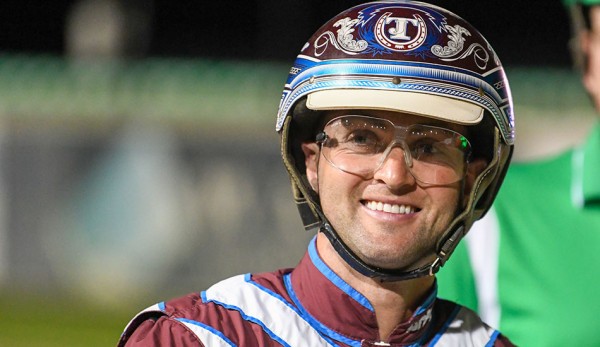 Driver Jack Trainor thinks the first 200m could be as important as the last 200m of Saturday night’s Chariots Of Fire at Menangle.

That’s talking about his own chances of winning with Krug.

Trainor and Krug’s caretaker trainer Carter Dalgety have a plan, but whether they get to implement it could depend on the dash to the first turn.

“If we find the lead this week, we want to just let him roll and make it a real staying test. Make those horses have to work really hard outside us,” Trainor said.

“But and it could be a big but, is the question whether we can find the front or not. Titian Raider gets out pretty quickly and Glenn (McElhinney, driver) doesn’t like to give away the lead often.”

Dalgety added: “We’d love to get the front and drive him like we stole him this week.”

The team pondered a gear change by taking the pull-up blinds off, but as trainer Cran Dalgety said: “We might as well leave them on, you don’t have to use them.”

Trainor said his confidence has grown as the week has gone on.

“I went past him yesterday (Wednesday) and he really caught my eye. It’s the first time he’s looked really, really good since last weekend,” he said.

“He gave me such an amazing feel when he won that first run he had over here and they really ran along that night, so maybe he’s at his best doing that.”

Trainor also teams with Cran and Carter Dalgety aboard their exciting three-year-old filly Just Remember Me in the strongest of the two NSW Oaks heats on Saturday night.

She’s won all three runs at Menangle this trip, but faces by far her biggest test from a wide draw (gate 10) against NSW’s best filly Madrid, who will be primed by two runs back and looks the leader from gate four.

“I love this filly. The way she’s trained-on over here and how she feels, I think she’s top, top shelf,” Trainor said.

“This week will be interesting from the wide draw with Madrid holding the lead you’d think, but I wouldn’t swap my filly for anything else in this series. I think she’s a bit special and is the one they’ll have to beat in the final.

“Put it this way, I won the Oaks on Anntonia last year and I think Just Remember Me has more class than her.”

“I thought about it, a lot. In the end I felt the risk of having a hard run or something going wrong this week wasn’t worth it,” he said.

“I know where I need to have her. She’s come on well since that win the other night when I knew she would need it.”