Trainer Simon Adlam capped a great weekend for his family when he scored victory with Itz Magical Meg at Addington Raceway on Sunday.

The weekend kicked off with a bang for the Adlam family when Simon’s son Oliver recorded his first win as a trainer courtesy of Slainte at Addington Raceway on Friday.

Adlam senior said it was a proud moment to see his son get the win.

“That was good. You can’t beat it when your kids are doing it and train their first winner,” he said. 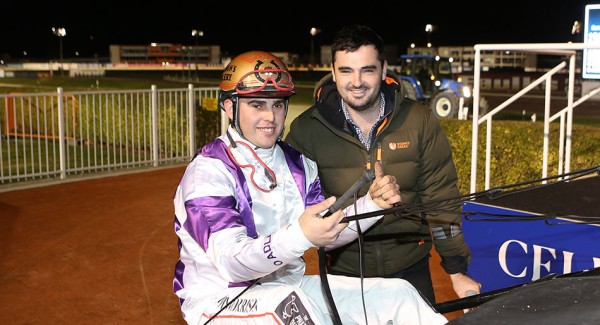 While Oliver has been sidelined with a rugby injury, his family have lent a helping hand.

“Between myself and William, my other son, we have been working the horses,” Adlam said.

Adlam was celebrating a win of his own when he returned to the Christchurch track on Sunday where Itz Magical Meg won her maiden at just her second start.

The four-year-old daughter of Art Major finished 11th at Ashburton on debut and Adlam said it was a better run than it looked.

“She went pretty good at Ashburton, although it might not have looked like a good run,” he said.

On Sunday Itz Magical Meg settled midfield for driver Gerard O’Reilly where they remained throughout.

Turning for home the pair found themselves behind a wall of horses, however, O’Reilly was able to find some clear running room out wide where Itz Magical Meg was able to show a good turn of foot to grab the lead and run away to a three-quarter of a length victory over No Matter Wat.

Adlam said they have taken a patient approach with getting the mare to the racetrack, but it has certainly paid dividends.

“She is not overly big but just needed to strengthen up, and she has done that,” he said.