Driver John Dunn labelled Need You Now the “complete package” after her brave win against the country’s best pacing mares in the $50,000 Garrards Premier Mares Championship at Addington on Friday.

The Harness Jewels winner settled a lot further back than usual because of a frenetic early speed but 500m later was in the one-one thanks to an inch perfect drive from Dunn, whose wife Jenna trains the mare in partnership with his father Robert.

That secured him the one-one behind Belle Of Montana with a lap to go and with Bettor Twist trapped wide it became a survival of the fittest.

When the early pressure started to tell on some of the leaders at the 400m mark Dunn drove back to the inside and didn’t have to go around a horse to win, downing a luckless Allamericanlover, who flew late after being trapped back on the inside.

Belle Of Montana clung bravely to third in her best run this campaign while Bettor Twist ground her way into fourth without ever looking a winning chance.

Dunn was surprised but delighted by how Need You Now won.

"I was surprised we couldn’t settle handier but they were humming early,” he told HRNZ.

“So I didn’t really intend being that far back, because it is unusual for her.

“But being able to move in front of two of the other favourites and get the one-one was a huge boost to our chances.

“Still, she had to be good and she is these days. She has always been a good horse but I actually think she is getting better.

“She feels stronger and can hold her sprint for longer now so she really has the all-round package.”

Need You Now will get the opportunity to show that off again when she chases her second Group 1 win in the $100,000 Breeders Stakes at Addington on February 11 on what is going to be a huge weekend for the industry, with the Harness Millions the next night and the yearling sales starting on the Sunday.

Considering the relative merits of four or five runs in the race the Breeders could come down to draws and luck in the running once again. 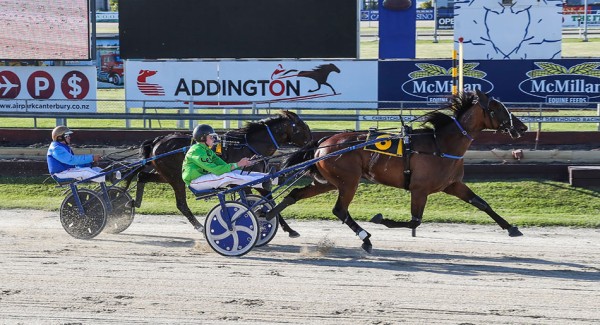 Earlier in the night Muscle Mountain and Ben Hope took luck right out of play with an instant domination of the Coca-Cola Summer Trot.

Having his first start since finishing fifth in the Dominion in November, Muscle Mountain sped straight to the lead over The Dominator and cruised clear at the top of the straight before knocking off late, allowing stablemate Midnight Dash to run him to one and a quarter lengths.

He was never asked for his best in trotting his last 800m in 57.5 seconds and will now head to Alexandra Park on February 12 where Sundees Son and Bolt For Brilliance lie in wait in the $50,000 Lyell Creek Stakes.