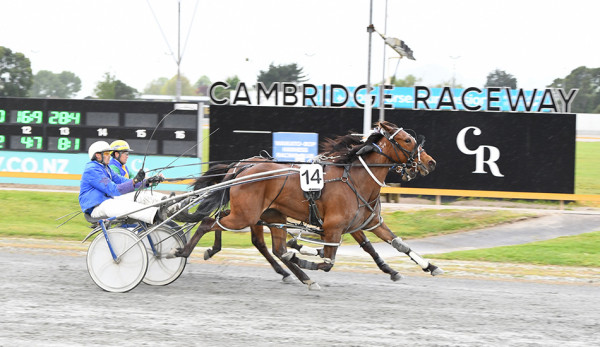 Toni Street will have some bragging rights the next time she hosts Seven Sharp.

Regular hosts Hilary Barry and Jeremy Wells both have racehorses who share their names, but it is Street whose namesake has recorded the first win of the trio.

Hilary Barry, a four-year-old Bettor’s Delight mare, was unplaced in all of her seven starts in New Zealand before being exported to the United States, while Jeremy Wells, a four-year-old Sweet Lou gelding, is still in search of his maiden victory after 14 starts for trainer Jack Harrington.

While Barry and Wells have been cheering home their namesakes to no avail, Street didn’t have to wait long to witness Toni Street, the horse, salute the judge.

The three-year-old Bettor’s Delight filly made the perfect start to her career when winning on debut in the Bruntwood Equestrian – Horse Agistment Mobile Pace (2200m) at Cambridge on Thursday night.

Toni Street was eased to the rear of the field by driver Sailesh Abernethy before she was improved three-wide to sit parked at the bell outside The Banker.

The Banker looked to have Toni Street’s measure down the home straight, however, the filly was able put in a late surge to record a head victory over her rival.

Trainer Jeremy Young was delighted with the win and he is now eyeing some bigger targets for the promising three-year-old.

“It was a super run. I said to Sailesh we might just roll on forward and she kicked on hard at the end,” Young said.

“It was a great run first-up and we will head for some fillies races now.”

Young admitted Toni Street doesn’t handle the right-handed way of going at Alexandra Park particularly well and elected to head to Cambridge on Thursday as a result.

“She goes a bit better left-handed, that is why we went down to Cambridge. Right-handed she just struggles a bit,” Young said.

While she struggles going right-handed, Young is thinking of testing her at Alexandra Park next week, giving her namesake the opportunity to watch her in the flesh.

“I might give her a run at Auckland next week, but I am wary that she is a little bit difficult at this stage going right-handed,” Young said.

“Toni Street (person) hasn’t been to the stable yet, but she can’t wait to come down and have a look at the horse.

“It’s great for harness racing and I look forward to seeing her.”

While Toni Street will likely back-up at Alexandra Park next week, a trip south to Addington Raceway in Christchurch remains on the cards.

“I said to the owners that if she goes well at Cambridge there’s a couple of Dunstan Fillies heats down in Christchurch and we may go down there now after that run,” Young said.

Young’s night got even better at Cambridge on Thursday when his only other runner, Pocket Book, recorded a 1-1/4 length victory in the BetaVet Natural Solutions Mobile Pace (2200m).

Workouts Alive and Well at Mot

For many years a mainstay of harness racing activity around Banks Peninsula, the Saturday morning Motukarara workouts hit some speedbumps in 2019.

From now to November 10 we will feature some of the great races, horses and personalities  with a new letter for each day. O = O’Sullivan