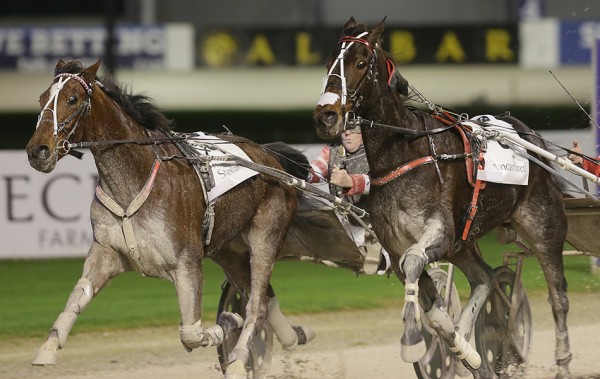 Kings Landing has rewarded his owners for their patience with his first stakes victory at Alexandra Park on Friday night.

He was then sold to Australian interests and entered the care of Brent Lilley but didn’t acclimatise to Victorian racing.

His owners decided to send him back to New Zealand and entrusted him to Waiuku trainers Michelle Wallis and Bernie Hackett, with a view to racing at Alexandra Park.

He has been unfortunate to run into the likes of Group One winners Sundees Son, Majestic Man, and Bolt For Brilliance, but he was able to bypass them on Friday and breakthrough for his maiden stakes victory in the Listed NZB Standardbred Uncut Gems Aged Trotters Classic (2700m).

The regally bred son of Muscle Hill and Group One-winning mare Pocaro took an early trail behind Silver Power. He soon found himself four back on the markers when Woodstone and Credit Master assumed the lead.

Driver Maurice McKendry bided his time on the fence, and he was able to steer his charge into clear running room down the passing lane to run down the leaders to win by a half neck over Woodstone, with a further half-length back to Credit Master in third.

Wallis admitted she wasn’t particularly confident heading into the race with Kings Landing, but was delighted with the result, and said it was just reward for his owners.

“He got a good trip and finished the race off nicely,” Wallis said.

“To be honest, we weren’t that confident heading into tonight. I thought Credit Master and the Hope horse (Midnight Dash) would be very hard to beat. I thought we were a runner’s chance and luck just went our way.

“It is good to reward the owners. They bought him and took him to Australia and he wouldn’t go left-handed so they sent him to us, which we are very grateful for.”

A long season told on stablemate Rain Mist And Muscle, who tired to finish sixth. The spelling paddock now beckons the four-year-old mare, who could be in line to head to the serving barn in the new season.

“I was a bit disappointed in her, I think she has just come to the end of a big season,” Wallis said. “She has done a super job, but she is just finding it a bit tough at the moment and probably needs a wee break.

“She may be going to the broodmare paddock. We are hoping to get a good time by her name before then, so we are not 100 percent sure what we do with her yet.”