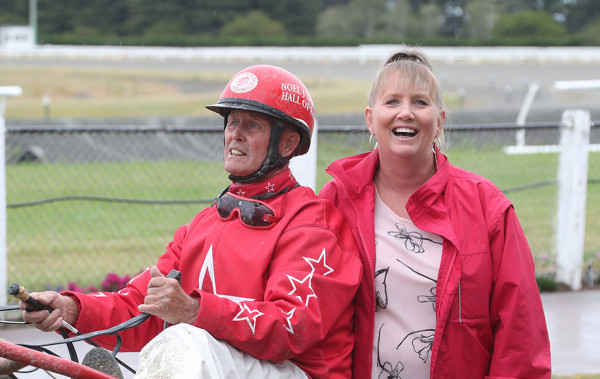 A tenacious Tango Tara willed himself to victory in the Ashburton Cup on Wednesday for trainer-driver Jim Curtin.

After making a searching run around the field to take the lead with a lap to go in the 3200m feature handicap, the five-year-old kicked back to win after being headed halfway down the long Ashburton straight by eventual third placegetters Franco Niven and Gavin Smith.

“Gav definitely headed me, but my horse does try like hell,” Curtin said.

“He is pretty laid back and he doesn’t overexert himself.”

“But one thing about him is he does pick up when you ask him.”

Most recently Curtin has not had the luxury of driving Tango Tango as aggressively as he did in Wednesday’s feature.

In his first real campaign against genuine top liners heading into the New Zealand Cup Curtin was forced to tuck the horse away for one run.

Racing against those stars and being driven that way meant Tango Tara was ready to step up when Curtin drove aggressively and would not be denied when challenging Steel The Show and John Dunn for the lead with a lap to go.

“He has never really been used in a race,” Curtin said.

“A couple of times early he went around and sat parked.”

“But most times he has sat back and run home.”

“But that was the first time in a while I had used him.”

“He has been racing against good horses, so you have to drive him for a bit of luck.”

After rallying bravely under Curtin’s urgings, Tango Tara scored by a half neck over Steel The Show, with a further half-length back to Franco Niven.

The victory gave Curtin his first win in the Ashburton Cup since driving Wait A Moment to victory for Jeff Whittaker in 1988.

Though it has been 22 years between wins in the feature event for Curtin, that is not because of a run of outs.

“I haven’t driven in it that many times because when it used to be on Boxing Day I was always away on the [West] Coast.”
“When I won with Wait A Moment I missed the first day and drove at Ashburton.”

“We were tempted to go to Omakau but the timing wasn’t going to be ideal.”

“I think the Invercargill Cup will be the race for him.”

“He will probably have another run at Addington before going down there.”

By January 31 Tango Tara should strip a fitter horse as he thrived, and possibly did a little too well, after enjoying some time off after his 12th placing in Self Assured’s New Zealand Cup.

“You wouldn’t believe how well he has done.”

“We thought he would improve from the run at Addington.”

“We didn’t give him a trial before that, we just took him to Motukarara one day and worked him.”

Curtin will be back on the West Coast Christmas circuit again this year when it kicks off on Saturday.

The reinsman starts three of his own horses and has six outside drives.