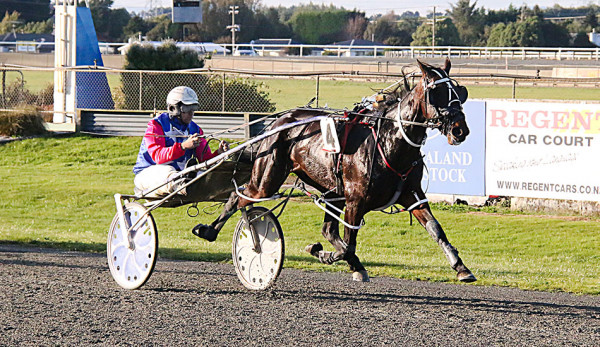 Some quick thinking more than five years ago continued to pay dividends for trainer Brent Shirley at Ascot Park on Saturday through the win of Tac Mac.

The three-year-old booked her ticket into next month’s Southland Oaks Final when powering away from her opposition to score by more than three lengths.

Tac Mac is the first foal from Lis Mara mare Tact Minaj, who Shirley didn’t have a lot to do with until after she finished well down the track in a race at Wyndham in 2016.

“Trevor Proctor said he was finished with her so I took her home, I went back through her races and the only time she had gone any good was on the grass,” the trainer said.

“So, I took her to a grass meeting at Gore a couple of weeks later and she won first up.”

Tact Minaj was raced by a group of Shirley’s stable clients including long-time supporter Colin Dixon.

Dixon was keen to breed a horse and Shirley encouraged him to take a foal out of Tact Minaj, who is out of the late Derek and Bessie Dynes’ brilliantly performed Tact family.

Tac Mac’s win on Saturday took her to the top of the Southland Oaks qualifying leader-board, effectively assuring her a start in the Group Two feature.

Shirley will go into the race will good respect for his opposition, but with confidence his filly will handle a hard-run 2700m.

“We have thought all along that she is a good staying filly, so the distance should really suit her.”

“It is not easy to go and win an Oaks but she definitely deserves her place in the field and if she gets a bit of luck she will go a very good race.”

“One thing about her is that she is coming up at the right time.”

“I took her to Addington during Cup Week and nothing went right for her on that trip.”

“We gave her a spell after that and it could have been a bit of a blessing that we had to put her out.”

“She has come up really good this time.”

It has not just been Tac Mac’s work on the training track or the racetrack that has confirmed to Shirley the filly has been thriving this time in.

“I took her to the trials at Winton before she had her first start back and after she won I stopped at the supermarket in Winton because Corona (beer) was on special.”

“She was booting the back of the float and it was making a heap of noise, so I knew she was pretty well.”

“A young kid actually came up to me and said have you got a bull in the back of your float?”

Tac Mac will start at Winton, either on April 17 or 23 ahead of her Southland Oaks quest.

Shirley and wife Raewyn have taken another foal from Tac Minaj, an American Ideal two-year-old.

The couple sold the filly to a client of Wyndham trainers Gordon and Colin Lee last year.