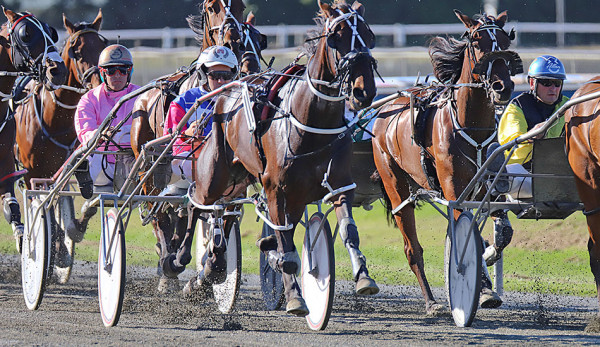 After a powerful return to racing Tac Mac looks ready to strike at Ascot Park on Thursday.

The Brent Shirley trained filly kicked her new campaign off in style when running second to Duke Of Dundee on Northern Southland Cup Day.

The effort pleased Shirley and showed the real Tac Mac after her form tailed off at the end of her last campaign.

“She has always had the ability but she had a lot of seasonal problems last time in,” Shirley said.

“I took her up to Addington and she didn’t settle in up there then she had another couple of starts and I decided to give her a spell.”

“She has come up really good and I was very pleased with her workouts before she ran second.”

After drawing the second row first up, Tac Mac moves into a much more suitable barrier 4 draw in race 7 for driver Nathan Williamson.

Combined with the benefit she has taken from her first up run, the three-year-old looks hard to beat.

“She has improved since her first run.”

“I gave her plenty of time to get over it and I have been very happy with her work since then.”

Like a lot of fillies in the South Island, Tac Mac has the Southland Oaks Final on her agenda.

A win on Thursday would just about guarantee the three-year-old a start in the Group Two feature.

Suzie Rocks looks the hardest of the older horses in race 7 to beat after she also ran second first up on Northern Southland Cup Day.

Battle Axe got home strongly for third at Wingatui on Monday but faces a tougher task in his second start this week.

“He went quite good at Wingatui on the grass, but that is his level,” Shirley said.

“It will be a lot harder for him this time, so he would be a place chance at best.”

With Grace clearly looks the horse to beat in race 4.

The Robert Dunn trained filly went a big race at Winton last week when working around to sit parked before running second to Captain Pins.

The three-year-old will be eligible for the Southland Oaks Final after her second Southland start on Thursday.

Shirley has recently taken over the training of Tairlaw Toll ahead of race 6.

The pacer has shown plenty of ability in the past but his form has dropped away recently.

But his new trainer would not be surprised if Tairlaw Toll produced an improved performance on Thursday.

“I have been quite pleased with him since I have had him and he does have a bit of ability.”

“He has got a good draw and I think he could be an eachway chance.”

Invaluable and A Taste Of Honey looks the hardest horses to beat in race 6.

Invaluable sustained a long and wide run at Winton when second to Ivana Legacy last weekend.

A Taste Of Honey dug deep for an impressive third when parked throughout Plutonium Lady’s Southern Belle Speed Series Final.