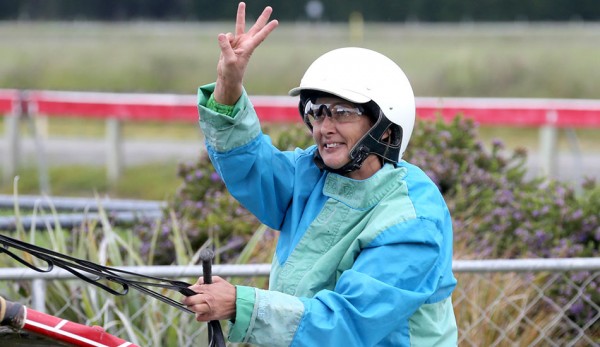 When it comes to preparing and driving winners few are going better than Sheryl Wigg.

"Strike rate Sheryl” became the first amateur driver in this country to chalk up 50 wins at the weekend, and that was from just 150 drives.

Together with her twin sister Cheree (six driving wins this season) the Wiggs are a dominant force in the amateur driving ranks.

“She goes alright,” jokes Sheryl of her sibling and regular race rival.  The pair famously dead heated a race at Motukarara in 2018.

The Auckland-based Sheryl Wigg brought up the milestone with the Greg and Nine Hope-trained Dalness First in the Amateur Drivers race at Rangiora on Sunday. The four-year-old Changeover  mare got the perfect trip in the trail, clearing out to win by one and a half lengths.

“I was real proud to wear the Hope’s colours ….  I had never driven for them before,” says Wigg.

Her winning ratio has been phenomenal with eight winners this season from 22 drives (and a UDR of .5253). She prides herself on being competitive, “ I like to give them a show and put them in the race.”

And it’s not just in the sulky that she’s having success.  She’s only recently starting training in her own right,  taking over the stables formerly run by her partner Tim Vince.

And with only eight horses in work twice this season she’s trained the trifecta at Alexandra Park.

“It just seems to be my year,” says Wigg.

As for the preference between training and driving?

“There’s more pressure when training, but both are exciting.”

And she has some big ambitions. She’d like to train 10 winners this season (she’s currently on three) and in future years would like to train a winner in  a “black type” race with one of her younger horses while her driving goal is “to represent New Zealand in some way”.

Specifically she wants to wear the Silver Fern at the next Amateur Drivers’ world championships.

“The next one is next year hopefully.”

In the meantime she just hopes her golden run continues.