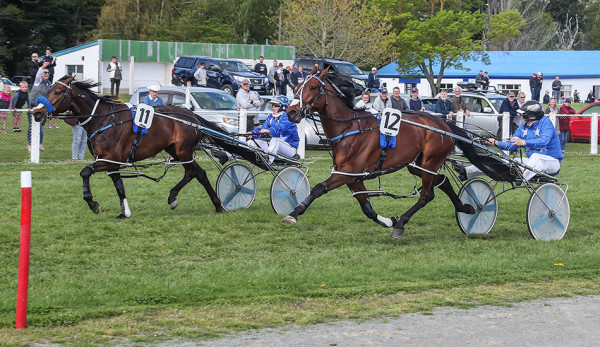 Spankem called on his best weapon – his sizzling turn of speed – to nail Self Assured on the line and give his New Zealand Cup campaign another boost by winning the Methven Cup on Sunday.

Giving away a race fitness edge to all of his rivals and being stuck third last before the home turn were not big enough obstacles to stop the Miracle Mile winner from taking out the 3000m group 2 feature by head and going one better than his brilliant first up effort in the Canterbury Classic.

Self Assured took the lead on the home turn, after sitting parked for the last lap of the Methven Cup, leaving Spankem with around seven lengths to make up.

At that stage, the winner’s part-owners, Philip and Glenys Kennard, admitted they almost gave Spankem no chance of winning.

And the sometimes tricky angle of the winning post at Methven had them convinced he didn’t clinch victory.

“On the turn, Glenys and I said if we get second or third we would be happy,” Philip Kennard said.

“Even on the line, I walked in to one of the boxes up the top there at Methven and I thought they had called that wrong.”

“I walked away thinking we had run second, quite happy, and then we got downstairs and they said you’ve won it.”

Spankem looks to have joined a rocky road to the New Zealand Cup at the right time with his excellent return from injury in the Canterbury Classic and his Methven Cup win.

And being just two runs in to his campaign, there is plenty more to come from the six-year-old.

By the time Spankem gets to Ashburton to defend his Ashburton Flying Stakes title, he should be significantly fitter.

“We are very excited,” Kennard said.

“You would have seen what a good run in the Canterbury Classic – it was first up and it was a very good horse that beat him.”

“Self Assured had to do a bit more work today and that probably helped us turn the tables.”

“He is going to go to the Ashburton Flying Stakes now, in a fortnight.”

“The best part about it, what we always like to hear, is that they have pulled up well after they have had a wash down.”

“And Natalie said he was jumping around like a lunatic.”

The Kennards may have tasted plenty of big race success, but their journey to their biggest of wins mean they keep their feet firmly on the ground.

“Glenys and I really appreciate how hard it is to get horses to these races.”

“It is a big achievement just to have a horse in the New Zealand Cup.”

While Spankem is clearly on track to attempt to go one better than his second behind Cruz Bromac in last year’s New Zealand Cup, another of the Kennards’ horses is not.

The owners are awaiting for the results of extensive blood testing done on Thefixer after the 2018 New Zealand Cup winner was pulled up out of the Canterbury Classic after suffering an atrial fibrillation.

Going by the running of the Kerry Hoggard Memorial Holmes D G at Alexandra Park on Friday night, the Kennards could have had a third contender for the New Zealand Cup.

South Coast Arden went a cracking race to get within half a length of the winner, Copy That.

However, the Brent Mangos trained pacer is not nominated for New Zealand’s premier harness race.

But, his team have the option of making a late payment to for the New Zealand Cup.