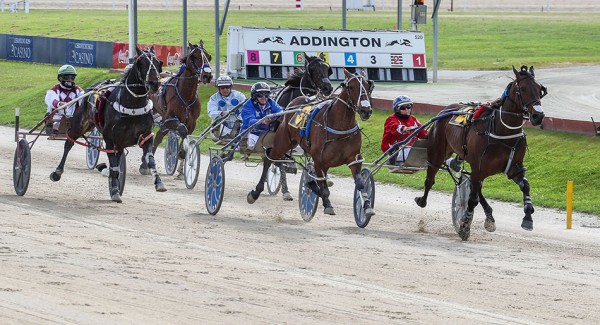 Sensational is the only word to describe South Coast Arden’s performance in winning the Gr.1 Spring Back With Mediaworks NZ Pacing FFA (1980m) at Addington Raceway on Friday.

The Brent Mangos-trained gelding flew off the mobile arm for driver Natalie Rasmussen to take an early lead before he was pressured throughout by a parked Laver.

Heading down the backstraight Mark Purdon peeled race favourite Self Assured out of the one-one to sit outside South Cost Arden and continued to apply pressure to the leader.

Self Assured bobbled at the top of the straight but was balanced up by Purdon and headed South Coast Arden at the 200m mark before his northern rival drew on all his reserves to regain the lead and win by a neck, with a further half-length back to Krug in third.

Watching from his home in Auckland, Mangos was over the moon with the win and the gutsy performance delivered by his horse.

“He was there to get beaten after the run he got, but he was too good,” Mangos said.

The win caps a standout southern spring campaign for the son of Somebeachsomewhere, who won two of his five starts and placed in his three other outings while in the care of the All-Stars team.

“It has been great for him down there,” Mangos said. “He wasn’t going to get that sort of racing up here leading into Cup week, and I felt he needed that racing because he hadn’t been at that level before.

“Going down and getting those runs before Cup week certainly made a difference.”

The win ends the All-Stars winning streak in the race, with the Rolleston barn having won the five previous editions, however, the victory still had an All-Star flavour with Natalie Rasmussen, who will re-enter her training partnership with Mark Purdon in the New Year, having been in the bike on three of those occasions.

She was delighted with the performance of her charge.

“He left the arm really well, he led up and copped the pressure, and he got a bit keen as well,” Rasmussen said.

“He was tired at the top of the straight, but he just never laid down.”

Rasmussen was full of praise for Mangos, who couldn’t be on track as a result of COVID-19 restrictions.

“The effort they have done with this horse (is amazing) because he is not an easy horse to train, drive, or manage, and I can only imagine what he was like as a young horse,” she said.

“Full credit to Brent, I am just so sorry he couldn’t be here, but I am sure he will be thrilled to bits.”

Mangos reiterated South Coast Arden hadn’t been the easiest horse to handle, but said a couple of trips south have been the making of the four-year-old.

“He has been a handful, it’s only the last 12 months that he has come around. I think being a Somebeachsomewhere, some of them can be like that,” he said.

“He has always been a bit of a handful but now he is developing into a nice horse.”

Mangos labelled South Coast Arden as one of the best horses he has been associated with and put out a stark warning for his opposition – he’s only going to get better.

“He is still a little bit immature so I can see him in 12 months being very good, he will be one of the best,” he said.

“He is right up there. I have driven some pretty good ones but he would be the best one that I have trained other than Bettor Cover Lover, she was a good mare and won $1 million. But he is a very good horse.”

Mangos has his eye on the Miracle Mile next year with South Coast Arden but said he has some other elite-level targets closer to home before then.

“He will probably go to Sydney in March if he gets invited to the Miracle Mile, we will just play that by ear,” he said.

“He will come home now for a freshen-up and will race in the Auckland Cup on the 31st of December and then he will go to the Cambridge Flying Mile in January and we will make a plan from there.”