A skin infection and some terrible timing has ruled South Coast Arden out of the Harness Million on Saturday night.

The New Zealand Free-For-All winner was supposed to resume his rivalry with Self Assured in the Livamol Sprint Classic at Alexandra Park on Saturday night but trainer Brent Mangos has been forced to withdraw him.

“It is nothing major but he developed a skin infection a few days ago and with the severe humidity up here it has gotten a lot worse than I would have liked,” says Mangos.

“It is right where the saddle goes too and it would have really annoyed him but we couldn’t use anything to treat it this close to the race.

“He will be fine in a few days but it is a shame.”

The setback will not affect South Coast Arden’s late summer and autumn campaign which is likely to see him race three times before The Race at Cambridge on April 14, which he is certain to get a slot for if he remains fit and healthy. 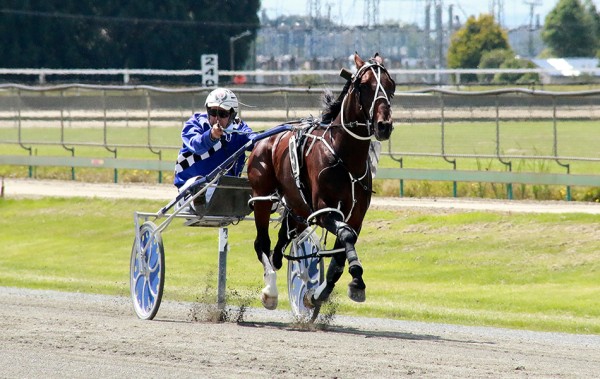 The race got its first official contestant on Friday when Dunstan Feeds signed up Southland pacer Pembrook Playboy for the new concept race.

“We wanted a horse that represented the fact we are a nationwide company with customers everywhere and we are thrilled to get a horse as good as Pembrook Playboy with top Southland connections we look forward to sharing the ride with,” said Dunstan boss David Smith.

“It has already been fun and we are looking forward to how the next few months unfold.”

Another slot holder, SENZ, have announced they will reveal the horse to fill their slot on their Mail Run show at 9am on Saturday morning.

Many of the potential contenders for The Race will compete at Alexandra Park tomorrow night, including Self Assured, Akuta, Franco Indie, B D Joe, Kango and even Hot And Treacherous while another leading contender Krug races at Menangle.