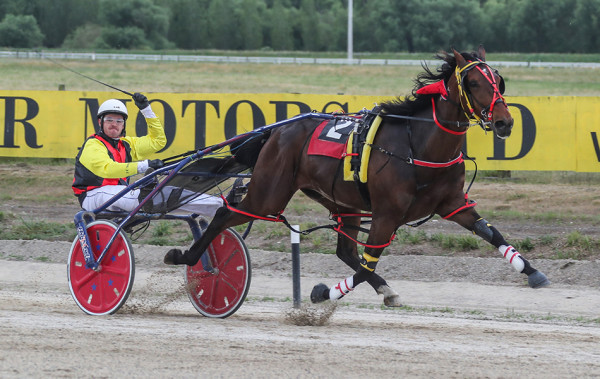 Jordan Simpson showed he is a good judge of horseflesh and a great judge of pace when training and driving his first winner at Rangiora on Friday with Will He Rock.

The twenty-six-year-old notched his milestone victory in incredible circumstances, by taking a $500 unbroken horse he selected as a weanling and then developed for racing, and driving him perfectly to score a front-running win.

Will He Rock’s performance on the track was as good as Simpson’s training and driving effort to break his maiden.

And because of that, the rookie trainer-driver was still coming to terms with his first victory in the hours after the race.”

“It was an amazing feeling,” Simpson said.

“To be honest, I didn’t think he was going to do it that well.”

“So, I am still a little bit overwhelmed.”

Simpson’s first look at Will He Rock came when the horse caught his eye when he was browsing Facebook more than two years ago.

“Reg Storer posted a photo of him on Facebook when he was a young horse saying he needed to move horses on and $500 would take him.”

“I went out and had a look at them – there was another colt out there with him and a filly – and they just ran across the paddock together.”

“I just liked his action, he was overstepping and he held his head high – he was a small little runt of a horse.”

“Once I finally caught him, I had a look at his legs and his legs were perfectly straight.”

“I was working for Jonny Cox at the time and asked him if I could have a horse in work.”

“He said yes, so I brought him over and started breaking him in as a weanling.”

It wasn’t long after Simpson began working with the son of Pinelea Farm, sire Johny Rock, that the trainer-driver thought he might have a good future.

Simpson maintained that opinion and the three-year-old went on to have his first start at Methven, last month.

After racing unkindly and weakening out of his debut, the trainer ironed out Will He Rock’s manners with the help of his employer, Darren Keast.

“Ever since I have had him as a young horse he has shown ability.”

“It was a shame that in his first start at Methven the occasion got to him.”

“I am working for Darren Keast and he is a good trainer coming up, as everyone knows.”

“He gave me a few pointers and I ended up putting a pole on him and took off the murphy blind.”

“And now he is a different horse.”

“The best thing is he is owned by my parents (Troy and Vicki Simpson) and hopefully they might share the kitty with me.”

Simpson also credited someone special for helping get Will He Rock to the winner’s circle on Friday.

“I couldn’t have done it without my partner, Xanthe Newman, she has been awesome and has pretty much been my co-trainer.”

Simpson rated his charge perfectly in front after he blasted the gate in his 2000m victory.

Rolling at an even tempo played to Will He Rock’s biggest strength – his staying power.

“My whole plan was to lead because the horse is such a good stayer.”

“When the mobile left he pretty much followed it out and when I was a few lengths clear I just tried anchoring him back to me.”

“At about the 600m I had a look over my shoulder and saw Unfazed (the favourite).”

“Then pretty much after that I pressed the go button and it just happened.”

He who used to take his nephew in the training sulky behind grand former campaigner, One Kenny.

“When I was younger my uncle used to put me on his lap and I would go around behind him.”

“And ever since then, I caught the bug.”

“Jamie Keast used to drive him and as it turned out I am now working for his son.”

With his first win secured, Simpson does not have a specific path he wants to take his career down.

He simply wants to do his best.

“I don’t have my mindset on anything at the moment.”

“All I want to do is do my best for anyone that gives me an opportunity whether they give me a go behind their horse or if it’s with my training.”

“I just want to look after them and get the best out of them that I can.”

Simpson’s first win came with the fifth starter from his stable and in his ninth career drive.