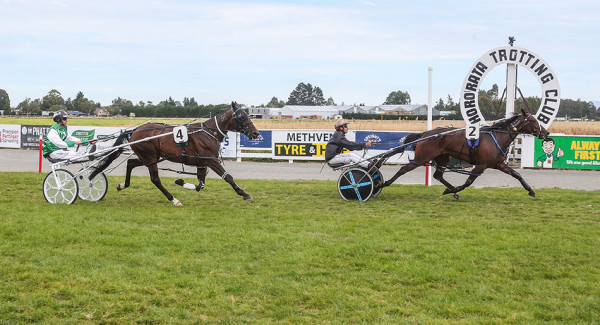 The Brad Mowbray-trained mare began well from her front mark and quickly took the lead for driver Matthew Williamson before he handed up to stablemate Nirvana Beach.

The pair remained untouched up front and She’s Tough was able to scoot up the passing lane and secure a 1-/1-4 length win over the fast-finishing Kiss The Girls, with Yossi a further three lengths back in third.

Mowbray was pleased with the win and was full of praise for Williamson’s steering efforts.

“I am very happy, Matty drove her a treat,” Mowbray said.

“We were happy with her going into it, we just thought she needed a bit of luck in the running to be thereabouts, and that happened. She sat in the trail the whole way, so I am more than happy with the run.

“Matty was really pleased with the way she did it. He said she did it well within herself.”

It was a polar opposite result to her last start where the daughter of He’s Watching finished last in her 2400m assignment at Methven late last month.

“She just did too much work last start, she seems to be better just following,” Mowbray said.

Mowbray has been pleased with the way his charge has pulled up after her winning effort and he is now looking to head south with her at the end of the month.

“She seems to have pulled up well, so we will head to Waikouaiti in a fortnight and keep heading on the good train hopefully.”

Earlier on the card, Ricky May reined home the Mark Jones-trained Braeview Kelly to win the Nevele R Fillies Series (Heat 2) Mobile Pace (1609m) by a head over Bettor Talk Out, while in the meeting’s feature trot, the Rakaia See Cleaning Handicap Trot (2400m), the Dennis O’Connell-trained Aveross Majesty stormed home late to beat Sun Swinger by a half head.