It might not have been obvious that Nathan Williamson made a daring tactical move to win the the Group 2 Southern Supremacy Final with Sand Wave.

Williamson made it back-to-back wins in the Diamonds Day feature following his win with Ragazzo Mach in 2021 when his three-year-old sprinted away from his rivals to score.

Williamson quickly moved Sand Wave into the lead after he was crossed at the start by initial leader Mossdale Ben.

Leading up with a hot favourite might seemed a regulation move to most.

But considering Sand Wave had only led once before in his career and he didn’t set the world on fire with a very sedate 1-59.2 mile win, it was something of a tactical gamble to head to the top.

That gamble paid would be one that paid Group Two winning dividends.

“I thought about it and ummed and ahhed and I thought when you have got the best horse in the race you drive them accordingly,” Williamson said.

“And he was the best horse on the day.”

Sand Wave proved he is not just a front-runner, he’s an exception one as he sprinted clear to win by two lengths.

The three-year-old will now head to the Sires Stakes Colts & Geldings Magnifique at Addington next month before being set for a big spring campaign.

“He is going to race again in a fortnight in a Sires Stakes race, but then he will go out.”

“We will target the cup meeting and look at the New Zealand Derby.”

“I think it is a great thing that it has been shifted to December.”

“It gives us a target in the spring for these horses.”

Williamson’s brother Brad landed a Diamonds Day treble including a victory in the Southern Country Cups Final which touched the hearts of the owners of Idealism.

Williamson wore an armband in acknowledgment of Carnie’s passing following a battle with cancer.

With the reinsman producing a brilliant front-running drive and Black having his pacer primed to run a big race, the Idealism team were able to honour Carnie in the best possible fashion.

“To be fair to him he hasn’t had a lot of luck in these Country Cup races,” Black said.

“I said to Brad during the week – let it rip, potato chip.”

“We will go for the doctor, they have got to catch us.”

“A good soldier always leads from the front, I believe, and that is what he did today.” 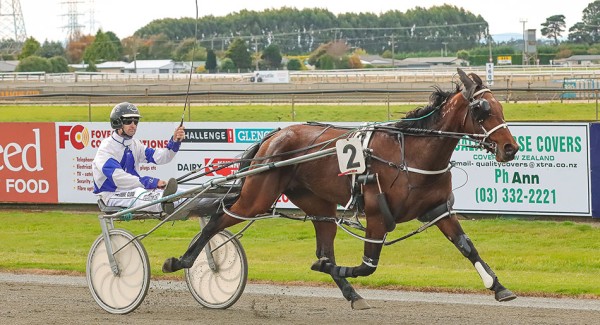 And there was a notable milestone for the in-form Robbie Close.

When favourite Moonlite Dream waltzed away to win the Coats and Schuck Jewellers Fillies and Mares Mobile Pace it brought up career win number 400.

"Goose", as he's known, started driving more than a decade ago with his 400th win coming from 4048 drives.