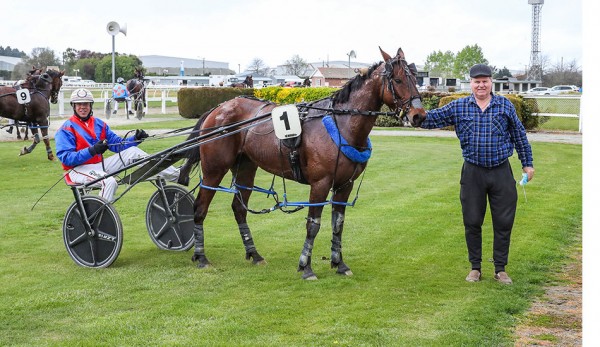 Wayne Robertson notched his first training win in more than 35 years when Precious Sara sprinted to victory at Timaru on Sunday.

Though he has had plenty of involvement in harness racing recently and has been behind the scenes of plenty of victories, Robertson hadn’t added any wins to his personal training tally since February of 1986.

That changed when Precious Sara improved on the two placings she’d produced in the new season to score a deserved victory in race 7 for John Dunn.

“I stopped training in 1986, just before the stock market crashed in 1987,” Robertson said.

“I went overseas, got married, had four kids and a business and a mortgage.”

“I worked for Roy and Barry Purdon 35 years ago.”

“There was Roy, Barry, Mark and everyone there, that was for about four years.”

“Brent Mangos drove her, we were only about 22-23 and he was only a junior driver.”

“I remember the race, she was six lengths clear – he went early, it was on the old Ruakaka track.”

A move to Canterbury in the past four years has seen the horseman able to start training his own team again.

“We have got a day-care in Mount Manganui, my wife commutes up there every couple of weeks.”

“We have just moved down in the last four years.”

“My wife has a share in Midnight Dash and A G’s White Socks.”

“I was a trackwork driver (at the Hope stable) and then started doing a couple of my own – Precious Sara and her three-quarter brother Pat’s Dragon.”

She has also had a break and was put in foal, eventually leaving a filly by Always B Miki two years ago.

“Greg and Nina had her and she had a good season a few years ago and then she had about six starts the next season as a five-year-old,” Robertson said.

“She sort of reached her mark and went off, so I put her in foal.”

“I was working for the Hopes as a trackwork driver for a couple of years.”

“After she had the foal she was running around the paddock and I thought I might try her again.”

Robertson has altered her training recently and it produced winning results on Sunday.

“I actually wasn’t working her hard enough, I just cottoned on to it last campaign when she finished.”

“This is the first campaign where I have got the methods right – the trainer is making less errors is how I would put it.”

“She really is a grass tracker.”

“I don’t know why but she is going out of the gate good, she never had that speed, she is pretty dour at the end of her races.”

“She finds the line pretty good and the grass takes the speed out of the others.”

Robertson said he has been pleased with the progress of Precious Sara’s first foal, who could trial later in the year.