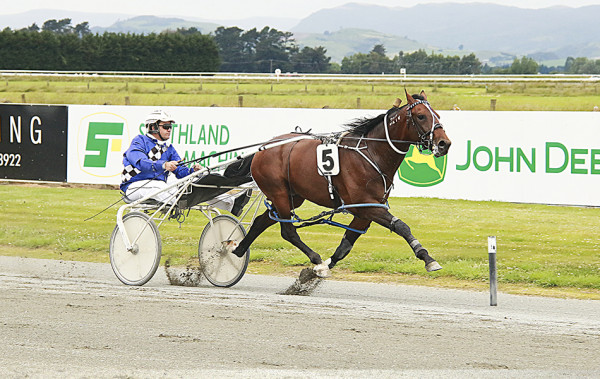 Trainer-driver Nathan Williamson pulled off the rarest of feats with his epic training performance to have his promising colt ready to beat older horses in a cup race in just his fifth start.

But despite how well the three-year-old powered away from a talented field, the first few steps he took in the Wairio Cup may be considered more of a testament to Williamson’s horsemanship than his electric home straight burst.

Ragazzo Mach came into the race without having had a standing start in a workout, trial or race.

Yet he stepped well – though not perfectly – and put himself in a prime spot to win the race.

“I just hate bad manners and that is why he has had a lot of practice at home,” Williamson said.

“Don’t worry, I still have horses that do things wrong.”

“But I hate bad manners and that we try to teach them.”

Ragazzo Mach settled down in fifth position early before Williamson pushed forward to take the lead and then handing up to Robyns Playboy with a lap to go.

Around the turn, the favourite Watch Me Now started a sweeping run while the winner was still waiting for the passing lane.

Ragazzo Mach then countered the momentum his rivals had over him with a stunning turn of foot to complete a brilliant win.

“I saw Robyns Playboy beginning very quickly and get up behind me,” Williamson said.

“When he moved I thought it was a good opportunity to get around and then take a trail because he was a good one to follow.”

“He felt really good turning in, but I was a wee bit worried that the other horses had their speed up and had kicked clear on the bend while I was held up.”

“But when he came through though he levelled out and sprinted up well.”

Ragazzo Mach went to the line two lengths clear of Watch Me Now, who put in a solid performance in her first start since starring on Show Day.

Her stablemate Love On The Rocks also impressed when working home well from near last to run third.

Where to head next is the big question for Nathan Williamson with Ragazzo Mach.

The trainer-driver is not keen to start his three-year-old on grass at Gore next week and he has ruled out a trip to Omakau.

The Roxburgh Cup will be a possible target when Williamson nails down a plan.

Ragazzo Mach was the middle leg of a winning treble for the trainer-driver on Saturday.

He also produced B K Merlot to win race 1 and drove the John and Katrina Price trained Yankee Party to win race 9.