Price reflects on “trying” week ahead of yearling sales 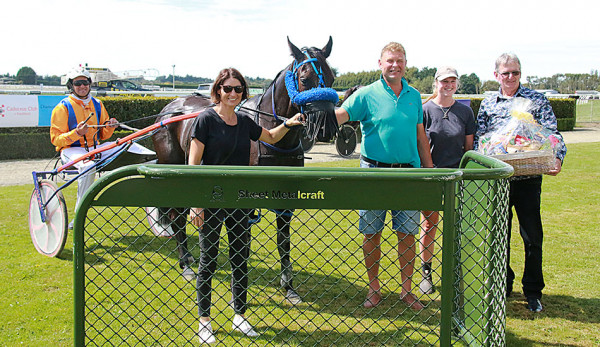 “The curve ball that was thrown at us - it’s been trying on the nerves,” she said, referring to the yo-yoing of Covid Alert Levels that saw this week’s NZB Standardbred yearling sales in Christchurch abruptly delayed. The sales, scheduled for Monday, were stopped their tracks and then postponed till this Monday, Tuesday and Wednesday.

What it meant for Price was a long float trip back to Southland with three colts.

The decision to head home was to get them back to familiar and comfortable surroundings.

“And they travelled so well, they haven’t left a crumb of feed.”

They will head back to Christchurch first thing Sunday morning with a Father Patrick colt (Cochise) she’s preparing on behalf of Beaudiene Breeding up for sale early on Monday. The trotters’ parade is at 1pm, with the sale underway at 3pm.

Also in the truck will be two highly-regarded Price Bloodstock Bettor’s Delight colts, with the well-related Chicago Bear being touted as a potential sales topper in Christchurch. He’ll go under the hammer on Wednesday.

Price is well aware of the hype around the colt but says that “doesn’t equate to money in the pocket. But he is lovely and with his pedigree …”

Chicago Bear is the fifth foal out of Christian Cullen mare Chicago Blues and a full brother to Chicago Bull.

His exploits across the Tasman are well known. Bred by the Prices and foaled in 2012, Chicago Bull was exported to Perth as a two-year-old. He has now won a colossal 61 races from 92 starts, with stakes earners of around $NZ2.5m. He is the second highest race winner in the history of Southland harness racing, behind the incomparable Cardigan Bay (80).

Price Bloodstock’s other yearling up for sale is Mandinka, out of Hartofdixie, an American Ideal mare who won six races for Barry Purdon.

“He's from a beautiful family with such a good nature – I don’t think there’s much between them”.

In his breeding line is the so-called “Me” horses including Dream About Me, Christen Me, and Adore Me.

At the Auckland sales turnover topped $5m, at an average of over $50,000. It’s hard to know how that will translate to the Christchurch sales which are a much bigger event with nearly 300 lots compared to Karaka’s 134. Of those 75 are from Southern Bred Southern Reared.

One that Price hopes will see her drive south next week with an empty truck and full pockets.