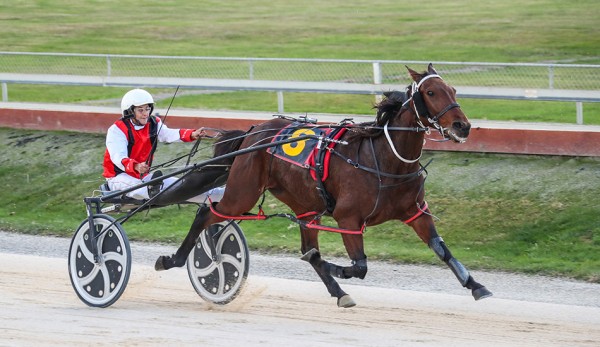 Michael House deflected praise after producing both Smokin Annie and Cha Cha B to win at Addington on Tuesday.

Smokin Annie continued her brilliant form for the man who arguably rates as New Zealand’s most enterprising trainer when scoring a front-running win for driver Sheryl Wigg.

Smokin Annie has won three times has never been further back than fifth since joining House’s stable.

“It is not just my effort, it is the effort of my wonderful staff and some great drivers,” the trainer said.

“I would say she was always a reasonable horse but when she came to me she had some issues with her feet, she had quarter-cracks.”

“They have resolved themselves, I can’t take the credit there, my blacksmith gets the credit.”

“And the drivers have driven her well.”

“Sarah O’Reilly drove her well at Manawatu and whoever has jumped on her has driven her well.”

“And Sheryl drove her great today.

Smokin Annie, raced on lease by House from Southland breeder Paul Hailes, is now likely to head back to her home province.

“I am going to send her down south for the mares series that is coming up down there for the rating 50-59s.”

House again poured praise on his driver when Cha Cha B took out race 3.

Blair Orange made a mid-race move with the six-year-old and slotted him into a sweet trip in the one-one set up his victory.

“It was a great drive, the trainer can’t take the credit there, the driver won that one.”

House’s Addington double following on from his win at Rangiora on Sunday with Rake.

The victory was the pacer’s sixth since joining House’s stable two years ago.

“When I first got him I put lengths on him and everyone that deals with him just loves him.”

“I won too much with him and it took a long time for him to come back down (in rating) to where he could win again.”

“He actually tries too hard, he is not a great horse for the ratings system because he runs a lot of fourths, fifths and sixths and doesn’t lose too many points.”

“The other day was good and he could do it again if he found the right race.”

“But then he would be in trouble.”
House said a major factor in his three wins over the past four days was having each horse in what he called the ‘right race’.

The trainer said the spread of horses across wide ratings bands in Canterbury was problematic for horses, especially rated in the lower 40s.

“For example, there were nine races which a rating 40 horse could gone in last weekend,” House said.

“And that displaces those horses and they become field fillers.”

“There were a number of 40-48 bracket that don’t go anywhere and their starts to win ratio is very high.”

House said with more streamlined programming and tighter rating bands in Canterbury the horse population would be served better.

“I go back to what they told us when the rating system came in – race like with like.”

House has also produced good results recently from his Southland stable recently with Johnny Mac and Changearound both saluting.

House said the programming of races in Southland is not such an issue.

“Southland is a little different to what we do here.”

“We get them ready here and then send them down.”

“They are there to race every week and if their form tails off or they get a bit tired they come back to Canterbury.”

“Tyler Dewe is doing a great job down there for me.”

House starts eight horses from his Invercargill barn at Winton on Saturday.