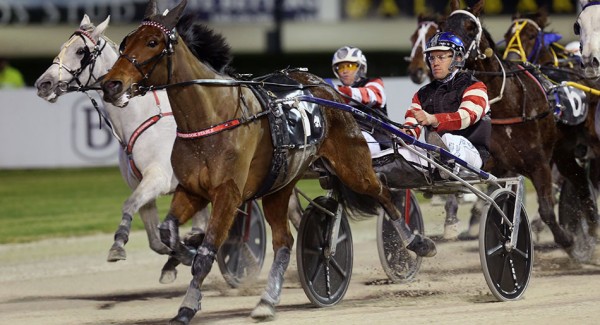 Michelle Wallis and Bernie Hackett stamped their mark as the dominant trainers of square-gaiters in the north with an impressive haul at Alexandra Park on Friday night.

The Waiuku trainers contested two of the meeting’s three trotting races and went home with a trifecta and a quinella.

The couple now sit on 35 wins for the season and couldn’t be happier with the way their team has performed.

“It couldn’t get much better,” Wallis said. “They are good winter horses and they are all going well.”

In Sequence kicked the night off with a bang in the Creatine Standing At Nevele R Handicap Trot (2200m).

The daughter of Majestic Son initially sat three back on the markers before driver Scott Phelan asked her to improve to take the lead off stablemate Emma Frost.

She kept her advantage for the remainder of the race, running away to a 1-1/2 length victory over a fast-finishing Invictus, with Emma Frost a further half head away in third, sealing the stable trifecta.

In Sequence had been knocking on the door in her previous three northern runs, and Wallis said her victory on Friday justified former trainer Amber Hoffman’s decision to send her north.

“In Sequence has been going well since she came up,” Wallis said. “Amber Hoffman thought she would be good up here and sent her up to us.

“She was a bit unlucky in her first three starts and Scotty (Phelan, driver) got her to the front tonight and got the job done.”

Wallis was also pleased with her stablemates runs to fill the minor placings.

“Invictus has gone well off 30m,” she said. “I thought it may have been a bit tough for him, but Crystal (Hackett, driver) drove him really well and got him in the running line and he finished it off great. I am really happy with him.

“Emma Frost went her normal honest race. Her manners are so good and she puts herself handy, tries her hardest and is always there.”

The stable’s night was further enhanced when Aldebaran Flame and The Governator secured the quinella in the NRM Handicap Trot (2200m).

The Governator did it tough, sitting parked for the majority of the trip, and while he looked the victor when grabbing the lead with 100m to go, Aldebaran Flame showed a blistering turn of foot out wide to nab her stablemate on the line to win by a half neck.

“Aldebaran Flame has got a bit of speed and she got the perfect run to run over the top of them,” Wallis said.

“I am really happy with the other guy, he just got a little bit rocky around the last bend, but he has come a long way in a short time. He has still got a lot to learn, he is not perfect in his gait yet, but he will be quite a nice horse.”