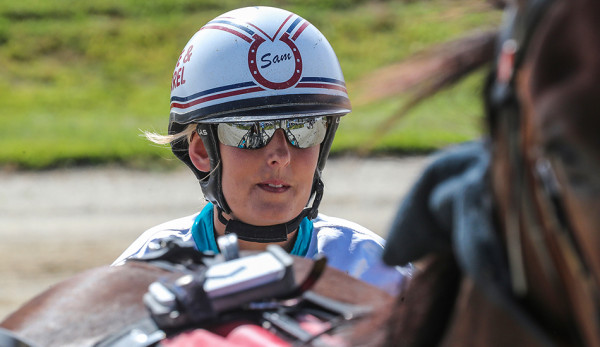 Driver Samantha Ottley pulled off a miraculous win with Bonnie Boy after being jolted out of her sulky and going within millimetres of crashing to Forbury Park track on Thursday night.

Ottley was facing the prospect of being thrown out of her cart and amongst a line of oncoming horses when a tightening of runners racing in to the first bend started to flip her cart sideways.

As her disaster approached, the Canterbury reinswoman hoped she would somehow be able to avoid what would have been an ugly and terrifying scene.

Ottley got her wish, but admitted she had no idea quite what saved her.

“I don’t really know how I got back in, it happens quick.”

“I am sore on my side, so I must have really strained to get back in.”

“But let’s just say I am really pleased that I did.”

After avoiding catastrophe, winning race 4 was not at the forefront of Ottley’s mind.

Instead, she was calming her nerves, which had just been fully tested.

“At the time I got back in the cart and around the first bend I was taking some deep breathes and thought OK, I’m safe now.”

Once Ottley and Bonnie Boy composed themselves it was not long before they were heading around the field to take the lead from the favourites To Ri Caitlin and Mark Hurrell.

Though it did not seem like the front was there for the taking, a fired up Bonnie Boy soon made sure it was

“The front wasn’t really there, but the horse latched on and I got up next to Mark,” Ottley said.

“I was hoping he would get a neck in front and then start to relax.”

“But the horse had other ideas.”

“He has won his other two races in front, so he does love it out there bowling along.”

A homestraight battle loomed for Bonnie Boy as he turned the corner with the To Ri Caitlin ready to come off his back and pounce.

But the 7yr-old dug deep to pull off the most incredible of comeback victories.

Bonnie Boy is trained by Anne-Marie Best, who is in the process of moving her stables from Fairhall, near Blenheim, to Canterbury.

Ottley had a much smoother trip towards victory when taking out the first race back at Forbury Park since it had its doors shut and then reopened for racing last night.

With a number of runners going off stride, Ottley and The Good Doctor were left clear in the lead throughout race 1.

The pair eventually went on to win the 2200m maiden trot untested by six and three-quarter lengths.

Ottley made it a winning treble at Forbury Park when The Peaky Blinder took out race 7 by a nose.

The filly produced a powerful win in maiden company last week with trainer Mark Jones in the sulky.

Ottley expected Jones would drive La Rosa in tonight’s race, but he insisted she take the reins.