Oscar Bonavena moving from All Stars 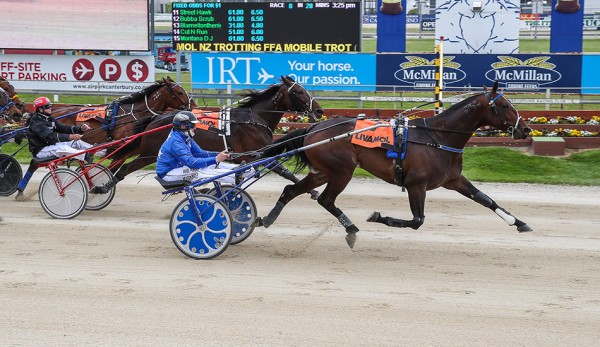 Outstanding trotter Oscar Bonavena is on the move and will join the Regan Todd stable for future racing.

The speed freak missed his scheduled clash with Muscle Mountain at Addington last Friday night after a knee issue flared up, prompting co-trainer Mark Purdon to make the call to Todd.

“His knee problem has been there for a while and it probably isn’t going ever going to totally go away,” said Purdon.

“So we think the beach is the best place to manage that and Regan is very good with those sort of issues.

“So we have told Chris Ryder (his US-based majority owner) and we hope we can see something like his best from his new base.

“But it is a shame he has had these issues for a while now because he is a very good horse.”

Oscar Bonavena proved that when winning the group one NZ Trotting Free-For-All during a spectacular Cup carnival and was again dazzling in the Trotters Green Mile at Methven in December.

His last start for the Purdon/Cullen team for now will be his last-start second to Sundees Son at Invercargill on January 12.

Sundees Son has himself had a change of plan this week as he was supposed to clash with Bolt For Brilliance in the feature trot at Alexandra Park on Thursday but that race was scrapped after attracting just four entries.

“It is a bit of a shame but he will go to the workouts on Friday instead,” said driver John Dunn.

That will allow Dunn to partner Sundees Son on Friday before flying home to drive at Addington, with Sundees Son and Bolt For Brilliance now set to clash in the $50,000 Lyell Creek Stakes at Alexandra Park’s Harness Millions meeting on February 12, with hopefully that race getting off the ground.

Thursday’s meeting will still see both star three-year-olds Akuta and Franco Indie make their Alexandra Park debuts but in a semi-open class race against stablemate Self Assured.

Purdon will partner Akuta, Natalie Rasmussen is likely to drive Franco Indie and Maurice McKendry gets the catch drive on Self Assured.

“It isn’t ideal the two three-year-olds having to take on Self Assured but we want them to have a race there before the Harness Million the following week so we will start them,” says Purdon.

“But we want punters to know why they are there and obviously we don’t expect them to be beating the older horses, especially not Self Assured.”