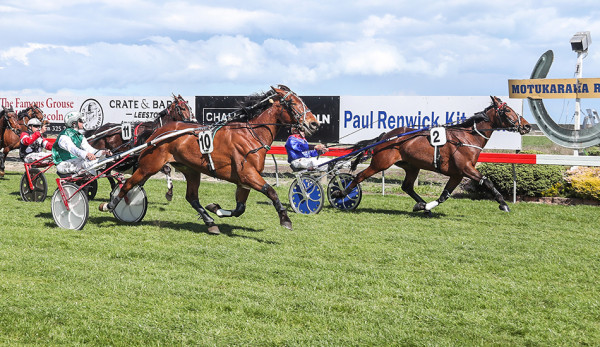 One Apollo recorded his second Group Three victory on Sunday when taking out the DG Jones Memorial Trotting Cup (2810m) at Motukarara.

The Brent White-trained gelding stepped away well off the front mark to sit three back on the pegs for a short period of time before driver Ricky May asked him to improve and the pair quickly took the lead where they remained throughout.

One Apollo was headed down the straight by Matua Tana, but the seven-year-old gelding broke and One Apollo was able to clinch a neck victory over the fast-finishing Heavyweight Hero.

“I was pretty rapt with that win,” White said.

“I was pretty confident that the 10m might just be enough to have the wood over them. But I didn’t expect him to lead-up and go into the wind both times, but he has done it and won it.

“It was a tough day with the wind blowing, so he has done a great job and it’s great to get another Group Three with him.”

The son of One Over Da Moon was taking a strong form line into the race, having placed in his last two starts, including running third in the Gr.3 Ordeal Trotting Cup (2600m) last start.

“He has been racing well all the way through. Even is couple of gallops have been good runs,” White said.

“I was pretty confident that the 10m might just be enough to have the wood over them. But I didn’t expect him to lead-up and go into the wind both times, but he has done it and won it.”

The Gr.1 Dominion Trot (3200m) now beckons the five-year-old who will likely have two lead-in runs to the big dance.

“He’s not too far behind some of those better ones and if he can mix it with them that would be good,” White said.

“The Dominion is the big goal. I am 50/50 on Ashburton (Trotters Flying Mile) at the moment, but I will sleep on it and make a call closer to the time. It will then be Kaikoura and then onto Cup Week.”