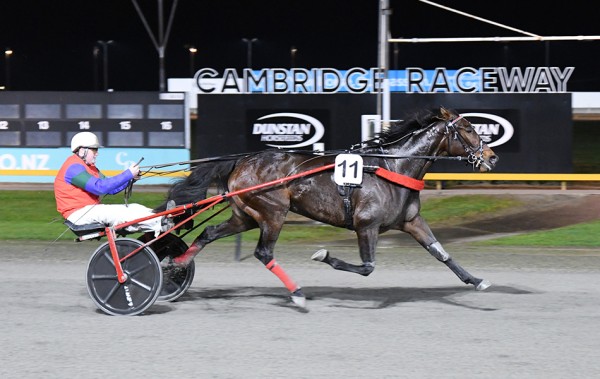 The Graeme Rogerson – Dylan Ferguson stable hold both the 2700 metre stand records at Cambridge. She Reigns set the mark for the mares in April (3:24.3) after starting off 40 metres and Delson lowered the mark for the colts and geldings when he won last Thursday off 60 metres (3:25.6). It was his fourth win in a row. Both She Reigns and Delson were driven by Ferguson. The NZ records are I Can Doosit (3:23.6 - Colts and Geldings) and Pretty Majestic (Mares) at 3:23.9.

Formerly trained by Nathan Williamson Foo Fighter has won three in a row in North America, including the feature pace at Batavia at the weekend. The horse has now won eight this year . The son of American ideal won three from 13 for Williamson before heading to Aussie in 2018.

One of harness racing’s biggest nights, the Dan Patch awards, have been confirmed for Florida on Sunday February 20 (local time), after last year’s event was a virtual one because of Covid. Dexter Dunn is in line for his third straight US Harness Writers Association Driver of the Year award. He has earned more stakes money than anyone, with $12,527,173 with 402 wins.

With a career record of 14 wins from 16 starts, three-year-old pacer Test Of Faith has ended the Grand Circuit season in North America as the top-ranked horse in the Hambletonian Society/Breeders crown poll. She’s the fifth horse to occupy the number one spot along with Manchego, This Is The Plan, Captain Corey and Lyons Sentinel.

The Geraldine Trotting Club’s meeting at Orari had the biggest turnover of any harness meeting in the country last week. But with showers on the day and a heavy track its total of $885,448 was down on projections. Addington’s two meetings on Friday and Sunday were close behind, with the weekly total at $4.1m.

The Methven Trotting Club is preparing for its Christmas meeting on Sunday December 12 where the features will be the Methven Four Square Pacers Green Mile and the Fast Track Insurance Trotters Green Mile. The track and facilities are in excellent order for the big day.It will be great to once again welcome the general public back on course and picnics and BBQs will be the order of the day. Patrons will be notified of any extra requirements closer to the day but only vaccinated people will be allowed on course and vaccine passports will be mandatory.

The Rangiora Harness Racing Club has confirmed it will host the very popular “Christmas at the Races “event at the Rangiora Racecourse on Sunday 19th December 2021 as normal.

The need to produce vaccine passes (which will be necessary at all future race meetings) will, unfortunately, slow admission to the Race course. Entry from Lehmans Road will be available from 9 am on the day and from West Belt from 10 am. The first race is programmed to start at 12 noon.

The Club has received a heavy demand for reserved track side sites with almost all presold. Catered Hospitality sites on the Amberley Hill have been well supported although a number who have expressed interest have, understandably held off booking until the Club was able to confirm that the day was proceeding as normal. It is likely that the remaining tickets will sell quickly. Bookings can be made by contacting Teresa at [email protected]

The Club will have great family entertainment on the day including a visit from Father Christmas. Racing includes the Rangiora New World Summer Cup, a $20,000 race which is part of the series leading to the Country Cups final with a stake of $100,000.

The Club looks forward to another great days racing and family enjoyment. Entry for those over 16 is $10 and as noted above all attendees aged 12 and older must have a valid Covid Vaccination Passport.