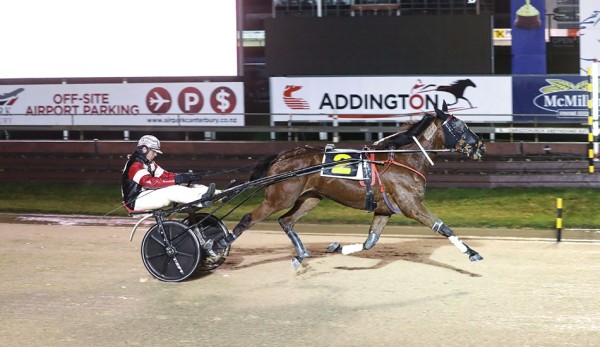 Trainers Robert and Jenna Dunn and driver John Dunn will give the three-year-old her first start behind the mobile arm in race 5.

Tyron Arohanui has put together a tidy record in her short career and returned from a spell with an impressive first up victory at Addington earlier this month.

With the filly looking capable of being aimed at the three-year-old fillies’ trotting features later this year, mobile experience will be a big asset if she gets there.

“She trots really nice, she is a lovely trotter and has a bit of ability,” Robert Dunn said.

“Johnny was pleased with her win and he has taken her back to the trials since then and she went well.”

“She has got to have some mobile racing now.”

“I think she will make it towards those better races, she has got a bit of ability there, for sure.”

The Dunn stable will attempt to break a run of five consecutive placings with Heisenberg when he steps out in 6.

Though the six-year-old must take on Terry, the overall strength of the field looks well within Heisenberg’s range.

“It has got to be this week, surely,” Dunn said.

“He is going good races without just being able to put his nose in front on the line.”

“It is not as strong of a field this week as he has been racing, so he would have to be a great chance.”

After consistent efforts, the trotter ran into bad luck when he was checked out of last week’s Darren DeFilippi Memorial.

“He has been going good races but that horse galloped in front of him and came right into his path and he couldn’t dodge it.”

“It was one of those things, I am still struggling to win a Darren De Filippi Memorial but hopefully we will get one one day.”

John Dunn takes the reins behind all three Dunn stable runners on Thursday.