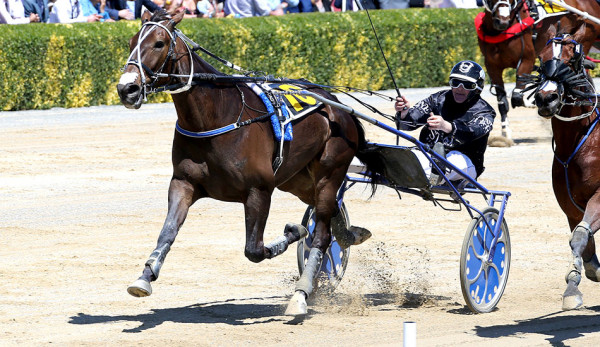 Reigning trotter of the year Winterfell has run his last race, and will spend his retirement as a trekking horse.

The four-time Group One winner finishes his career with 13 wins from 36 starts and earnings of $429,917.

Owner breeder Trevor Casey made the decision after the Majestic Son gelding struggled to get back to his best, with seven unplaced runs this season.

“It was looking promising, but he had issues so we decided to do the best thing by the horse and retire him.”

Casey rated Winterfell in the “top three or four horses he’s been associated with.”

“He wasn’t as good as Lazarus but he’s up there with Escapee and Pocaro.”

As for racetrack performances, Casey says two spring to mind immediately with Winterfell.

“The Inter-dominion Final and that race at Auckland (National Trot) when he beat Oscar and Majestic Man.”

Always more suited to racing right-handed, the 2019 Inter-Dominions at Alexandra Park saw Winterfell at the peak of his powers. He won two heats and then took out the final by half a neck as a $1.80 favourite for trainer-driver Mark Purdon.

A fortnight later In the Group One Sims Pacific Metals National Trot on New Year’s Eve, this time with Natalie Rasmussen driving, he outfinished Majestic Man and Oscar Bonavena, trotting his last half in 55.6 and the last 400 in 27.4.

“He was a very good horse but very headstrong, and sometimes he could become very keen.”

After his dominant form in the north Winterfell was duly named Trotter of the Year at the last Harness Racing New Zealand awards in September last year. Winterfell was trained for all his early career by the All Stars stable (Purdon and Rasmussen) but then had stints with Regan Todd on the beach at Woodend and then Joshua Dickie at Cleveland as they tried to get him back to his best.

At home Winterfell, who was named after the so-called “Capital of the North” in hit TV series Game of Thrones, was known as “Dale” (as in the cartoon character in the TV ad for Chesdale Cheese).

“It was because he was in the paddock with Cheezel, who was by Betterthancheddar and I thought Cheez and Dale, ” says Casey.

Now as a six-year-old Winterfell has already been re-homed as a trekking horse in Auckland, with Casey saying the horse will be special to him and those who got to know him.

“He was a character and everyone loved him.”