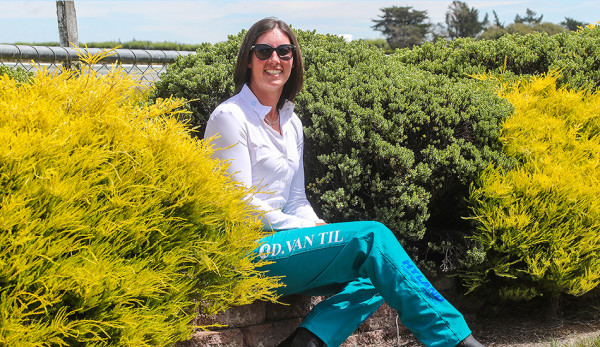 Today marks the start of the fourth Teal Pants campaign. This year there are some fresh faces in Team Teal, including a new first.

For the next six weeks (Feb 1 – March 14) the annual campaign will be held, with the first race meeting at Addington this Thursday (Feb 4).

At every meeting every win by a female driver will see donations from the relevant club and $100 each from Harness Racing New Zealand and Woodlands Stud. All proceeds go towards funding ovarian cancer research. Last year $50,000 was raised.

It’s estimated there are 300 new cases of ovarian cancer in this country every year, with it being the fifth leading cause of cancer death in New Zealand women.

The ambassadors this year are Alicia Harrison, Nicky Chilcott (North Island) and Ellie Barron and Sam Ottley in the south.

One newcomer onboard for 2021 is junior driver Devon van Til who’s been keen to be part of the campaign for a while.

“A year ago I was at a horse show and bought a shirt with teal on it, thinking I could wear that one day.”

“I’m really looking forward to the ladies’ races and the junior races, the more the better.”

“This is an opportunity to raise money doing what we love.”

Based at Waikouaiti in Otago, the 22 year old won’t be donning the teal pants but he will become the first male to win a teal cap during the campaign.

“I’m keen to show my support,” Hurrell says, “ I’ll wear the cap and for every win I’ll donate some dollars.”

Asked if he’s expecting a bit of ribbing from some of the other (male) drivers, he said “probably a bit but we’ve had some trouble with cancer in our family, and it’s a great cause.”

And it’s raising awareness about the cause – as well as money – that the next six weeks is all about.