Perfect drive on Midnight Dash gets the prize 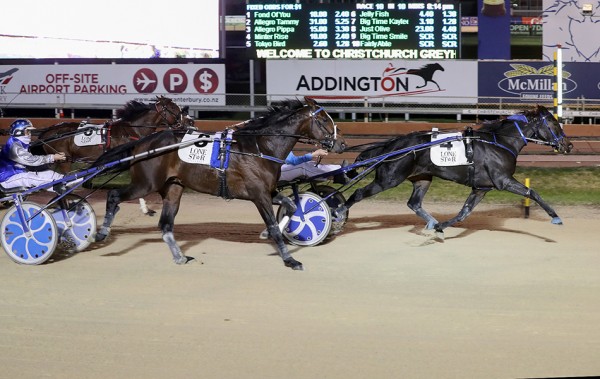 Ben Hope pulled the right rein with Midnight Dash in the main trot at Addington on Friday night but now he is going to give that same rein away.

Hopes continued his break out season as a driver when a daring decision won him him the Lone Star Sires’ Stakes Trot over Oscar Bonavena and Chinese Whisper.

Hope and Midnight Dash found themselves the only pair parked outside a single file line of horses early, from where he either had to go back or forward.

He chose forward and he chose right.

Midnight Dash was able to stroll to the front front from near last and when there control the speed with a 65-second middle 800m before having too much kick at the top of the straight.

“After not looking so good early it worked out well,” said Hope.

“I thought about going back but I thought there weren’t many attacking horses in the race and if I was able to get the lead and slow up it would suit him because he was fresh tonight and not at his peak.

“So it all worked out perfectly.”

The win was Hope’s second major trot win at Addington in a few months after he reined Muscle Mountain to win the NZ Trotting Championship on April 9, for his first group one in a race in which Midnight Dash finished fourth.

And it is Muscle Mountain who Hope will drive at the Jewels on June 6 for his parents, trainers Greg and Nina, meaning Tim Williams who drove Midnight Dash to that NZ Champs fourth could be back on at Cambridge.

“I really like this horse and he is definitely improving all the time but Muscle Mountain is our top seed,” said Ben.

Last night’s racing left no doubt as to who is the top seed in the two-year-old trotters either as Highgrove kept on winning with a faultless display in the $75,000 NZBS Harness Millions, untested to beat Wy Fi by three and a half lengths.

The big son of Love You is continuing the golden run with trotters for trainer Robert Dunn, who of course also has Sundees Son, and even more for driver John Dunn who has that pair as well as our best three-year-old Five Wise Men.

Highgrove may not look a natural two-year-old but he still looks too developed and too strong for this crop and if he brings his best form to the Jewels it is hard to see him beaten.

Other highlights of the star-studded night were South Coast Arden blazing a 54.6 last 800m in front to win the free-for-all pace, one of five winning drives for Natalie Rasmussen who also reined Shan Noble, Bettor Twist, Regal Attire and Samhara on a night where Hayden Cullen trained five winners.