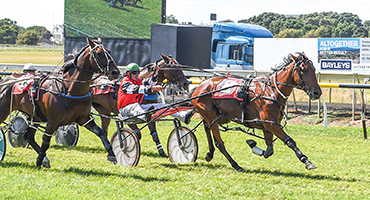 A self-described “opportunist” Michael House is looking at racing’s resumption with much anticipation.

“It’s going to be an oasis of lower grade racing.”

And that’s something that has the Canterbury-based trainer excited : “We’ll have 60 racehorses ready to go at the end of the month.”

And they will be placed at all four venues, from Auckland to Invercargill. His Auckland barn will service Alexandra Park and Cambridge and then he’ll also have teams at Addington and Ascot Park, where he has leased a barn.

“I’m going to separate them out, there’s not going to be five in one race.”

As of now House has 60 wins from 460 starts to be third on the trainers’ premiership behind Mark Purdon and Natalie Rasmussen (69) and Robert Dunn (79). Clearly he has designs on improving that : “We are going to have a swish at beating Mark Purdon”.

Last season the House stables got to 98 wins, including 62 at Palmerston North which has become a fortress for what he calls “The Red Army”.

With 60 in work House is reluctant to single any of his out, and he is “just joining the dots” on where and when his horses will race.

“Some meetings could have two, they could have 10… this is an opportunity we have been screaming out for our whole careers.”

While he was agonisingly close to three figures as a trainer last season another milestone also awaits. He has 494 wins overall, in a training career dating back to the late 1980s.