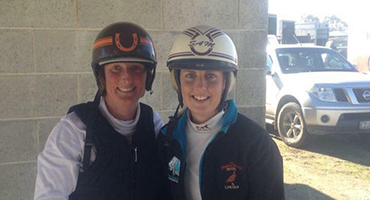 “It wasn’t my best day, it was just horrible at the start.”

“And I didn’t want to leave,”says Sam.

At the time the mother and daughter – “it’s always just been the two of us” – were living in South Canterbury and Sam was around 19.

“I had a four-bedroom house all to myself,” says Denise, though she says it was her who insisted that Sam leave to take up a job at Colin and Julie DeFilippi’s Canterbury stables, as “I knew if she didn’t go then she’d never go.”

At the time Sam had been working at Murray Tapper’s stables in nearby Timaru.

A year or so before she left home, Team Ottley had a “fairytale” result, as Denise puts it, at Oamaru in November 2008. Sam won her very first race-day drive on a horse trained by her mother, on her 18th birthday.

Nigel Paul was the horse in question. After starting well he went to the lead, then lobbed the trail only to take the passing lane and get the job done.

“It’s the stuff you think about in your dreams,” said Sam.

“It was pretty exciting,” said Denise, “to train my horse to win on her birthday.”

And it was far from a one-off. Rocki Warrrior won five from 38 including the 2017 Tuapeka Cup at Forbury Park. Backmarker Eamon Maguire was the hot favourite but Rocki Warrior stepped well, went straight to the front and stayed there.

Sam : “We just thought, let’s just go as hard as we can for as long as we can, and he won easily.”

As a driver Denise has had two wins and eight placings in 62 drives, and has trained 30 winners from 441 starts while Sam was the first female junior driver to post 100 winners in New Zealand and currently has 438 wins (4494 drives). In the current drivers’ premiership she is 4th on 51 wins behind Blair Orange, Matthew Williamson and John Dunn.

“It’s quite unreal,” says Denise , “to think this is just a little girl from Orari, there’s a lot of pride”

Sam : “I pinch myself sometimes, just at the opportunities I’ve had.”

In recent years Denise made the move north to join Sam and her partner Stevie Golding. She lives in a separate cottage near the main house.

“We don’t live in each other’s pockets,” says Denise, though the pair usually catch up at least once a day. Denise works horses at Ken Barron’s property before looking after the eight she has in work while Sam is busy at Mark Jones’ stable at Burnham six mornings a week.

Both reckon they are pretty similar to each other, agreeing “they are easy-going and are passionate about horses”.

There’s also a strong work ethic. While at Orari Denise juggled a number of jobs including milking cows, caring for the elderly and doing the bookwork at a local hotel, as well as training her horses.

“I remember being at the rest home and whistling them up at dinner time, like I did the cows. Sometimes I forgot which job I was at!”

While the COVID-19 crisis has been “strange” both are eagerly looking forward to racing’s return.

Denise is keen to qualify a promising trotter she has called “Majesticmite” while it’s another Majestic that Sam has signalled as one to watch. It’s the Mark Jones-trained Majestic Lavros, a last race winner by a nose over One Majic Kenny at Addington in March.

As for any special activities they have planned for Sunday?

Sam : “Usually we’d be racing at Timaru but we will just probably go for a walk or something.”

Denise : “Hopefully I’ll get a box of chocolates, I love chocolate.”