Emotions ran high at Addington on Friday night after John Morrison was able to salute his number one fan Charlotte McLeod just days after she lost her battle with cancer. 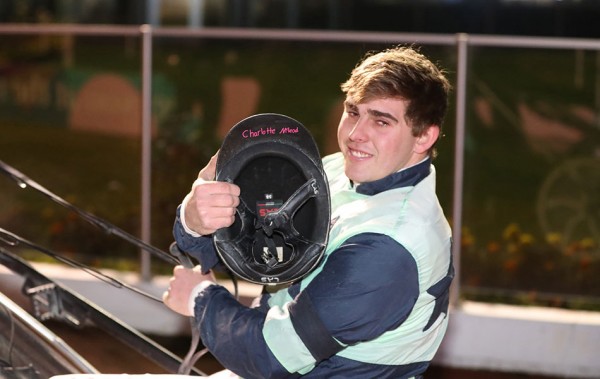 Charlotte was in Morrison’s thoughts when he flourished his whip as he crossed the line in his win with Time In The Bottle in race 7.

The junior driver carried the brave youngster’s name, written in her own handwriting, on a sticker on the inside of his helmet.

The victory was the first time Morrison had been able to honour Charlotte with victory after she lost her tenacious battle with Neuroblastoma – a type of cancer that forms in nerve tissue – on Monday at just nine years of age.

Charlotte is the daughter of Hayley and Hamish McLeod, with Hayley the niece of Southland breeder Diane Dynes.

Morrison has a special bond with the Dynes and McLeod families.

“Family is the main thing, this family have supported me all of my life and without them I wouldn’t be here,” Morrison told Harness Racing Unhinged’s Nigel Armstrong.

Morrison admitted it had been a difficult week for the family after he returned following his win honouring Charlotte on Friday night.

“It has been a tough week.”

McLeod was an avid supporter of Morrison’s career and enjoyed watching his races.

The youngster, along with and her brother Fergus and sister Maggie even had a pair of Morrison’s pink silks made to fit her.

“She loved watching the races, she always enjoyed the races and we even got colours made for the three kids,” Morrison said.

“Her and her two other siblings, we had colours made with the pink and the white hoops and they would turn up at the races (wearing them).”

“It was good, you always knew she was watching.”

Morrison first carried Charlotte’s name on the inside of his helmet just one day before her passing when finishing second at the Harness Jewels with Lifes A Beach.

“Charlotte hand printed that herself and I got to wear it at the Jewels when I ran second.”

“And that was the last race she got to watch.”

Morrison’s victory brought up his 50th win in the sulky this season.

That tally gives him a five-win advantage in the national junior driver’s premiership over Sarah O’Reilly, who notched doubles at Forbury Park and Addington to set up an intriguing battle.

As he strives to bring up three consecutive junior titles Morrison will have Charlotte in his thoughts.

“All of this season so far is for her.”

A service to celebrate Charlotte’s life will be held in Ashburton on Monday at 1.30pm.