Mighty Art back to Flying best 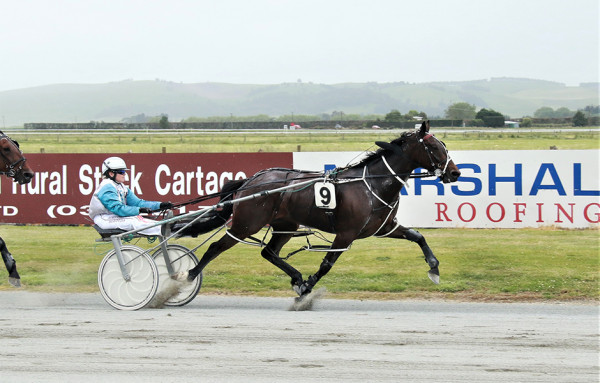 Mighty Flying Art put a frustrating year further behind him when zipping to a smart mile (1609m) victory at Winton on Thursday.

The five-year-old took full advantage of the perfect run driver Sheree Tomlinson secured him in the trail when cruising to the line untested to win race 7.

The victory continued the Murray Brown trained pacer’s rise back to his best form after his four-year-old term turned in to a write-off.

“He had to have two throat operations,” Brown said.

“The first one didn’t work, so I was talking to John Hay and he said to send him up to his vet [in Canterbury] to get his throat lasered.”

“That is why he only had two starts last season, but he is coming back to it now.”

Mighty Flying Art’s throat issue, which was restricting him taking in the maximum amount of oxygen possible, saw his form drop away towards the end of his three-year-old term.

And it also affected his confidence.

But the way the horse powered to the line yesterday and in his eye-catching prior effort at Ascot Park suggests Mighty Flying Art is feeling like his old self again.

“They say it takes a while for them to get their confidence back because they think their breathing might start getting cut off again,” Brown said.

“He is getting there, his last run on that really rough day [at Ascot Park] was good, he got home really well.”

Brown can not see why the horse can not get produce something similar now that his issues are behind him.

“He hasn’t lost any of his speed.”

“He will probably go into the country cup races now, we will just see what comes up.”

Invercargill owners Brent and Michelle Ballantyne not only got reward for their patient wait for Mighty Flying Art to return to his best form yesterday.

They got further payback from a fortunate phone call with the pacer’s Winton win.

Brent Ballantyne attended the national yearling sales with Brown and they liked what they saw in the son of Art Major and grand producing mare Fleet’s Pocket.

Both owner and trainer then left the sales venue without securing the horse despite some post-sale negotiations the horse’s breeders, Lex and the late Heather Williams.

“Murray had flown home by that stage and I had left and gone to the Casino but then Lex gave me a call to say we could have him for $50,000,” Ballantyne said.

Once Mighty Flying Art got to Brown’s stable he was broken in by Tomlinson, who worked for the trainer at the time.

Earlier on yesterday’s card, Tomlinson also gave Hazer a perfect trip to help him secure a deserved win in race 2.

The reinswoman slotted the Chris Gerken trained pacer into a perfect one-one sit after bailing out of a three-way tussle for the early lead.

Hazer is raced by the Nickels For Pickles Syndicate – a name inspired by Gerken’s surname.

The syndicate is an all-family affair, made up by the trainer and his wife Sonia and their four daughters Mallory, Tarryn and Kelly Gerken and Haylea Millar, as well as their partners.