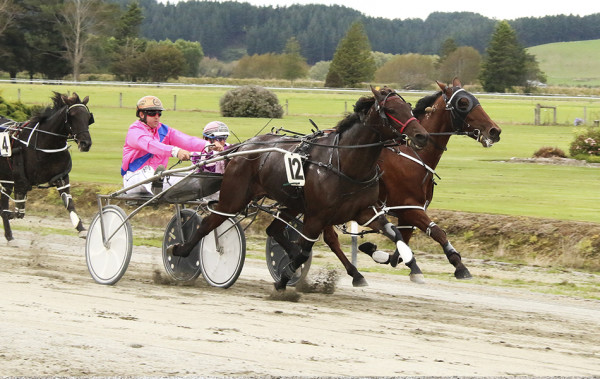 Brett Gray is worried he may be training himself out of a job with Memphis Tennessee.

The five-year-old pacer, who seems he has been around so much longer than his age would suggest, overcame a 20m handicap to win the $15,000 MLT Wyndham Cup on Thursday as racing returned to Young Quinn Raceway.

He did so courtesy of a good beginning and recorded 4:1.9 for the 3200m even though trainer Gray didn’t really think he would relish the extreme distance, the win giving Gray his 200th success in the training ranks.

But now after eight wins Memphis Tennessee is getting to a mark where he might become harder to place down south, which is very tricky because seven of those eight career wins have come in the south even though he has spent much of his life being trained in Canterbury.

“I think the racing down here suits him and he has done a great job,” says Gray, who is working 25 horses at present.

“And he has a couple of races that probably suit at the end of the month but I don’t really know Richard (Symon, owner) wants to do with him after that.

“He is going to become even harder to place down here so maybe he will be sold and I will lose him.

“But he is a good horse to work with and would do a good job overseas.”

Memphis Tennessee’s win capped a great return day to Wyndham’s famous track with visiting trainer Hayden Cullen getting his first win on the track followed very quickly by his second.

Cullen won the Macca Lodge Kindergarten Stakes with Akuta with the heavily-backed favourite holding out stablemate Bollinger even though the latter gave him and punters a fright at the top of the straight.

A race later maiden Samhara paced 1:56.1 to head home another Cullen-trained quinella over Stag Party in the three-year-old pace.

Earlier in the day class four-year-old trotter Ultimate Stride raced below his best when trotting roughly on occasions to be well beaten in his comeback race.