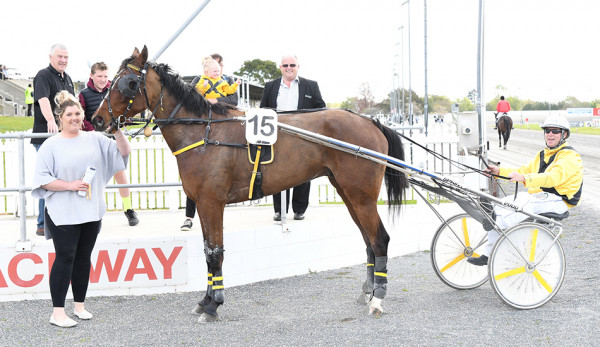 There would be few people who visit the winner’s circle at Cambridge Raceway more than Jo Stevens, but on Saturday night it was for different reasons.

The local trainer is usually busy interviewing drivers post-race for Cambridge Raceway’s social media channels, however, on Saturday she was delighted to head there to take her place in the winner’s photo, not only once, but three times.

It was the first time Stevens had recorded a winning treble and she said it will be a night she will never forget.

“It’s just one of those nights you only dream of, especially when you are a small stable,” she said.

Griffins Hall kicked-off the night in winning fashion for the barn when taking out the opening race on the card, the Tim Hall Farrier Services Trot (2700m).

The son of Angus Hall looked to feature in his last start before breaking in the closing stages and Stevens said she was delighted to finally get a winning result for his large group of owners.

“He had gone really well last start and had just galloped in the final stages and was unfortunately disqualified,” she said.

“He won earlier on in his career and was handicapped quite harshly and it took a long time to get back in a grade where he’s competitive and he has finally got there.

“We have got a big bunch of owners in him so it was great for them because they have been so patient and have allowed us to take our time with him.

“He is a half-brother to Majestic Man, so he’s well-bred and is worth the time and I am glad he repaid his owners for their patience.”

Stablemate Major Rage recorded the barn’s second victory of the night when victorious in the Friday Night Is Steak Night @ The Clubhouse Mobile Pace (2200m).

It was the five-year-old mare’s first start for the stable and Stevens said she was quietly confident heading into the race.

“We didn’t want to line her up until we knew she was 100 percent. I was confident but at the same time we have still been learning about her,” Stevens said.

“We knew two on the second line was a good draw for her and she was going to get a nice trip. She has been working well and we were happy with her.

“She was going well for (former trainers) Frank (Cooney) and Tate (Hopkins) without the form being on the board.

“I remember her workout at the start of this prep she came second to Meetmeinsorrento who has gone on to race in the Harness Millions and has won two since then. So the form stacked up and I thought just dropping back from Auckland she was going to be a chance.

“It was really cool to see her do it.”

While delighted to have recorded a winning double, the highlight for Stevens was yet to come.

Promising trotter Rosie was making her debut in the Candy and Jase 40…Really Trot (2200m) and the four-year-old didn’t disappoint, winning by three-quarters of a length over fierce rival Demolition Man.

Stevens owns Rosie with partner Dylan Ferguson, who drove the mare, and she said it was very satisfying to get the victory and bookend the meeting.

“We bought Rosie as a yearling and she is a four-year-old now, so it has been a long process,” Stevens said.

“We did go into the night thinking she was the best of our three chances so when the other two won I thought ‘is the best one going to go pear-shaped?’

“With trotters on debut anything can happen but ability-wise we knew she had it, she just had to do everything right.

“It’s awesome to finally get the win, especially having owned her as a yearling and Dylan broke her in.”

Stevens was impressed with her mare’s debut performance and she believes Rosie has a bright future ahead of her.

“I don’t think this is the last we will see of Rosie. I think this is just the start for her, we think a lot of her,” Stevens said.

Stevens was quick to deflect the spotlight for the victories.

“Peter Ferguson (driver) does so much for me. I wouldn’t be able to do it without him,” Stevens said. “We work the horses together all the time and he is a huge part of the stable.

“As well as Peter and Dylan, (trainer) Graeme Rogerson is also a big help. Rosie has been over with Dylan (Rogerson’s stable foreman) the last couple of weeks because we only have the three horses in work and she needed to work amongst other horses.

“After that horrible weather on Monday night we took Griffins Hall and Major Rage over to his track to fast work because his track is incredible. Without people like him I wouldn’t be able to do it as well.”

While Stevens was overjoyed with the success of her stable on Saturday night, she said she was run ragged trying to keep up with her social media commitments for Cambridge Raceway.

“Tonight I didn’t even know where I was or what I was doing half the time. I missed a couple of interviews because I was in the swab box, which is a pretty good problem to have,” Stevens said.

While it can make for a hectic schedule, Stevens said she enjoys doing the post-race interviews for Cambridge Raceway and Alexandra Park, a job she has undertaken since COVID-19 enforced measures were introduced in March.

“I have only really been involved in harness racing since being with Dylan and it has been really cool for me doing the form and putting myself out there with the interviews,” Stevens said.

“It has been really good. Everyone has been so accepting of it, which is awesome. It is quite daunting putting yourself out there on social media, but the feedback has been great and I appreciate the drivers being accepting of it.

“I started to do the interviews in the first meeting before we went into lockdown, when owners weren’t allowed on course.

“There were comments on social media that people should be taking videos for their owners. I said I would do that and then Dave Branch (Cambridge Raceway chief executive) asked me to do some for Cambridge Raceway.

“I had runners in so I said I would do it and after that Alexandra Park approached me to do it for them as well.

“It has just carried on. I thought I would just be doing it while there were no crowds, but they said while it is still being well received we might as well keep doing it.

“It’s crazy busy, but it’s good, and it’s great to look back on afterwards. I really enjoy it.”